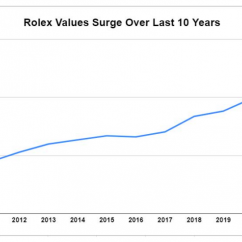 Newport Beach, CA--The gains made in the housing market, precious metals and in the stock market since 2011 have been impressive, but according to Bob's Watches, the world’s largest pre-owned e-commerce retailer of Rolex and luxury watches, the value of several Rolex timepieces have outperformed the value of traditional assets over a ten-year period.

Bob’s Watches, in a report, says it has compiled 10 years of pre-owned Rolex sales data and has tracked the appreciation of Rolex watches by model compared to the major asset classes: stocks, real estate and gold. Crunching the numbers, it says the results are “staggering.”

Rolex, a private Swiss company, doesn't reveal how many pieces it makes per year, but it's estimated that it produces about one million pieces annually. Even a novice watch enthusiast knows the demand for certain Rolex models have wildly outpaced supply, causing prices to skyrocket on the secondary market.

From 2011 to 2021, the average price of a used Rolex watch has gone from less than $5,000 in 2011 to more than $13,000 by the end of 2021, according to Bob’s Watches. As staggering as this growth is, the amount that Rolex prices have gone up since the beginning of the pandemic (2020) is nearly equal to the total price increase that can be observed during the entire previous five-year period.

“This trend shows no signs of slowing,” the watch retailer said in a statement.

This growth has outpaced the returns of the Dow Jones Industrial Average and gold prices, according to Macrotrends, and median home sales according to U.S. government data. 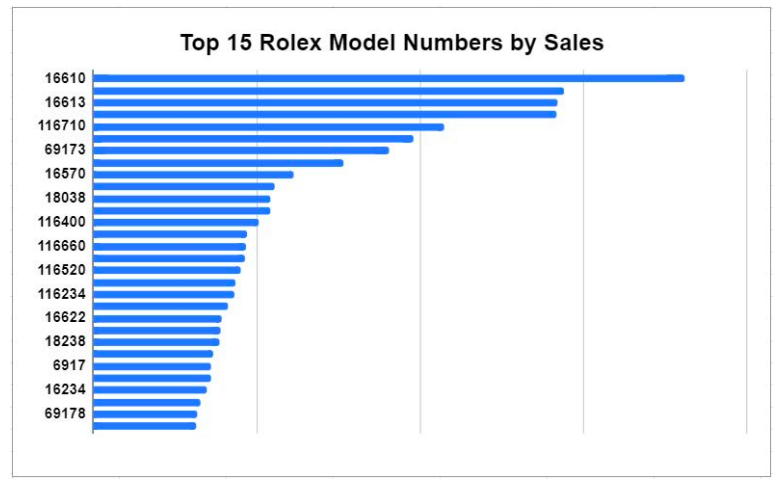 During this ten-year period, the prices for all Rolex models increased, however, as mentioned, some models have outperformed in the secondary market. Daytona claims the number one spot for the highest appreciating Rolex model, as it has more than tripled in value during the past 10 years, with an average pre-owned price of more than $30,000 for 2021, according to Bob’s Watches data. Meanwhile, the Rolex Day-Date, and Sky-Dweller have more than doubled in price during this same 10-year period. In addition, the relatively new Rolex Sky-Dweller, introduced in 2012, “has achieved its impressive results in even less time than its siblings,” according to the report from Bob Watches.

Certain women references have also proven quite popular during this period. The Lady-Datejust collection represents a total of three reference numbers from this top 15 list, including the fourth best-selling Rolex watch - the stainless steel and 18k yellow gold Lady-Datejust 69173.