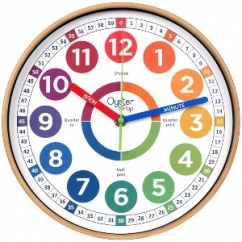 According to a BBC report, Emma Ross-McNairn, the director of Oyster & Pop, dismissed the claims as “nonsense” and characterized the letters as “bullish.”

The family-run business, owned by two sisters, Sarah and Emma, sell colorful wall clocks designed to help children learn to tell the time. They retail at about £20 ($25). Rolex is famed for selling high-end wrist watches including the Oyster Perpetual line and Submariner.

The report noted that Rolex lawyers argue that a “reasonably well-informed consumer” would think of Rolex while looking at the brand logo.

“Consumers will inevitably be misled into thinking that your products emanate from Rolex,” the company’s lawyers added, according to the report. Lawyers further demanded the company to change its name along with logo and website domain.

According to the report, Ross-McNairn fears that following Rolex’s orders would "crush" their business.

“You see Formula One and Rolex sponsoring such huge events like that, you don’t then think of a children’s clock company,” she said in the report. “If someone says oyster to me, the first thing I think of is the Oyster Card on the tube, not Rolex watches.”

She reportedly added that the company’s lawyers had taken a “strong bullish accent,” emphasizing that the letters were disappointing and aggressive.

“I don't think anyone could confuse our clocks as coming from Rolex,” she reportedly said.

Read more on what experts think about situations like these in the report.