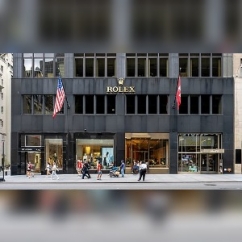 Geneva, Switzerland--Rolex is planning to invest $1 billion in a new production site in western Switzerland, a move that's said to generate 2,000 new jobs.

The luxury watchmaker hopes to build the new site at Bulle in canton Fribourg and inaugurate the factory in 2029, per a report.

The report adds that the deal is yet to be finalized and constitutes the sale of two plots of land measuring 100,000 square meters, equivalent to ten football pitches. The purchase also requires the Bulle parliament's approval.

"A project of exceptional magnitude is on track in Bulle with the prestigious company Rolex," Oliver Curty, president of the Fribourg government, confirmed in the report, adding that the authorities would "ensure that it succeeds."

Rolex, which had a turnover of almost $8 billion in 2021, currently produces around 1 million watches annually.

The largest watch manufacturer has several production sites in Switzerland, and it remains to be known how the new factory will impact the company's production capacity.

Learn more about the new factory in this report.

Next article:
Why Brilliant Earth Has Been Expanding Its Retail Footprint