Omaha, NE—Diamond fashion and bridal jewelry sales started off strong this year, according to data from The Edge Retail Academy. Through the end of January, sales were up a whopping 55% by volume and 56% by units over the prior year, although the average ticked dropped slightly (-1%). Gross profit for diamond jewelry rocketed during this period, too—up 54%—while gross margin held steady at 48%.

For bridal jewelry, sales shot up even more—88% by dollar value and 91% in units—through the end of January compared to the same period a year before. Again, the retail ticket also declined slightly (-1.01%) but gross profit was also up 88%. Gross margin gained slightly (+1%) over a year earlier. 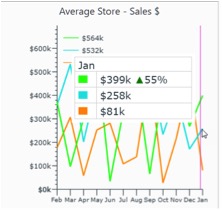 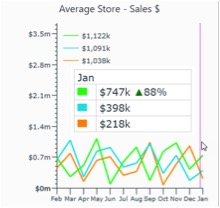 Diamond bridal and fashion categories both rocketed in January year-on-year in aggregated data from The Edge Retail Academy's retail clients. In the left column, diamond fashion sales by volume, top left, and units, bottom left. On the right, bridal sales shot up 88% year on year in total dollars, and 91% by units, bottom right. 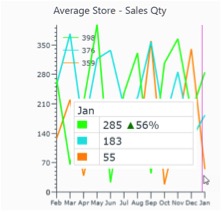 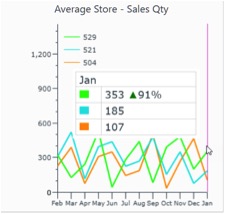 But January’s figures likely include leftover holiday sales. Through the end of March, sales had returned to a more consistent ratio: diamond jewelry was up 4.8% by value and 4.5% by volume over the same period a year earlier. Bridal jewelry sales, while still up over the prior year, were much more modest: up 2.6% by total dollar value and only 0.3% by units through March. The average retail ticket, meanwhile, held steady, noting only a minuscule rise of 0.97% over the prior year. Gross profit was up 5% on diamond fashion jewelry and 2.8% on bridal. Gross margin held steady—48% and 45% respectively—in both categories.

But as the year progressed into spring, diamond sales grew mixed, according to The Vibe, a report compiled by The Edge’s Sherry Smith. April was relatively flat, and in May, diamond unit sales are up, but the average retail sale is dropping. Meanwhile, strength in other categories—colored stones and pearls—is growing. Units are flat but the average ticket and gross sales are up, suggesting consumers that like those categories are willing to spend more on them. Finally, for silver and alternative metals, both gross and unit sales are down but individual tickets edged up. It’s worth noting, however, that branded and designer silver with higher price points were performing stronger than low-end goods through May. 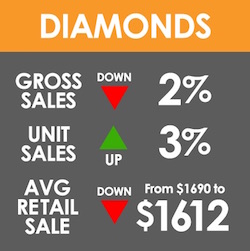 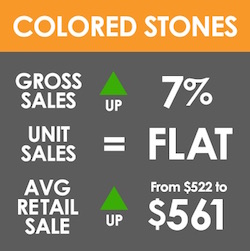