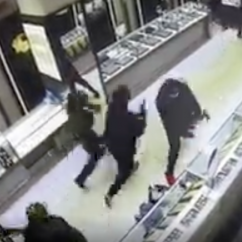 San Jose, CA--A smash-and-grab robbery and assault took place at a jewelry store inside the Eastridge Center, according to a report by CBS.

The robbery, which took place Monday morning, was the third time the Eastridge Center was targeted since fall. CBS reported that the robbery took place shortly before 11 a.m. It added that nine suspects — all-male — used sledgehammers to burst into J. & Huss Custom Jewelry store.

Per the outlet, suspects robbed tens of thousands of dollars worth of diamond jewelry, gold, and watches, stuffing the loot in their pockets.

"This is not just smash and grab. This is more than that. We need help. Something needs to be done," said the store's general manager, according to CBS. "All of our savings are gone. We need support from the city. Insurance is giving us a hard time. Third time being a victim like this and I request Sam Liccardo [San Jose's mayor] do something. He has to take an action. We feel helpless."