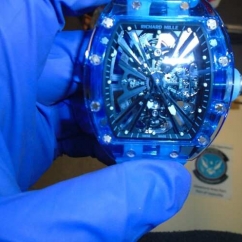 Louisville, KY--U.S. Customs and Border Protection (CBP) officers seized three shipments of counterfeit luxury goods in a 24-hour timeframe, which include watches, bracelets, necklaces, earrings, and rings. All totaled, the value of the fakes was estimated at more than $4.55 million.

According to the CBP press release, officers inspected a shipment arriving from Hong Kong heading to a residence in Ontario, Canada. Inside, officers found 29 Rolex watches, 2 Hublot watches, 2 Breitling watches, 1 Tag Heuer watch, and 3 Omega watches. According to the release, 37 of the counterfeit watches had a Manufacturer's Suggested Retail Price (MSRP), if these were real, of $1.11 million.

The following night, March 9, officers seized two packages. The first shipment contained another 1,034 items of counterfeit jewelry. It was also arriving from Hong Kong and headed for a Miami company. The MSRP would have been over $1.19 million had these items been real.

Later that night, officers inspected a parcel arriving from the United Arab Emirates. They found just a Richard Mille watch with an MSRP of over $2.25 million inside. This fake was heading to a residence in California.

"CBP is responsible for enforcing nearly 500 U.S. trade laws and regulations on behalf of 49 other federal agencies," said LaFonda D. Sutton-Burke, Director, Field Operations-Chicago Field Office, in the press release. "This is yet another dramatic example of how CBP officers work every day to protect the American consumer, the U.S. economy, and U.S. jobs."