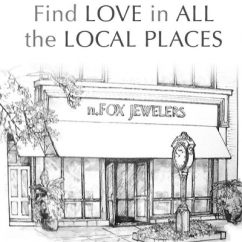 Saratoga Springs, NY--According to a statement released yesterday by Governor Andrew Cuomo of New York, the first confirmed case of the UK strain of COVID-19 virus has been detected in Saratoga Springs. The strain was traced back to an individual affiliated with a Saratoga Springs jewelry store - N. Fox Jewelers, located on 404 Broadway, Saratoga Springs, NY. All individuals who visited the store from December 18 through December 24 are encouraged to contact the Department of Health and receive a COVID-19 test immediately.

The new strain was detected by the Department of Health's Wadsworth laboratory as part of the state's UK strain testing program.

"It's a gentleman who is in his 60s," explained Cuomo. "He was symptomatic, but he is on the mend and he's doing better. He did not travel recently, so this suggests that it's in the community, it was community spread as opposed to having traveled to the UK, et cetera...The sample was originally done in Saratoga Hospital and then was one of the samples that Wadsworth received as part of their UK testing program. There are 3 other cases in the jewelry store. We don't know if they are the UK strain of COVID, we're testing for them now."

"From a public health point of view now it's about contact tracing, and this UK strain is reported to be 70 percent more contagious than the normal COVID strain," he continued. "So, we want to make sure we're doing everything we can to do effective contact tracing on this case. And we're going through the employees of the jewelry store, but as it was a retail establishment we need the cooperation of the public."

Cuomo added that this versiobn of COVOD-19, called the B117 strain, has been identified in California, Colorado, Florida and 33 countries. "And my guess is the states that are effective at looking for it will find it." The New York State Coronavirus Hotline can be reached at 888-364-3065.

Next article:
CLASSIFIED: Immediate opening for a Texas-based Sales Representative