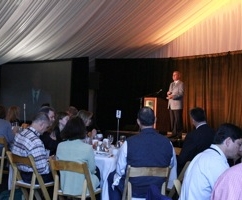 Scottsdale, AZ—(Commander retired) Mike Abrashoff, who during his military career spent 18 months as captain of what went from one of the worst to “the best damn ship in the Navy,” was the first keynote speaker of Centurion 2013.

Author of It’s Your Ship: Management Techniques From the Best Damn Ship in the Navy, Abrashoff's message was both clear and inspiring: work culture starts at the top. Have, and share, a vision of why your employees should be proud to come to work every day, then involve your employees in the process and invest in training to give them the confidence they need to be their best.

When Abrashoff took command of the USS Benfold, the ship was armed with all the latest technology, yet ranked near the bottom in productivity in the Navy’s Pacific fleet. Knowing he’d be judged on how well he could turn things around, Abrashoff realized that the first step was to turn himself around and change his style of leadership. Within 18 months under his command, the Benfold went from among the worst to the first place and winner of the Navy’s coveted Spokane Trophy for ships in the Pacific Fleet. Under his command, retention rate for sailors—those who signed on for another tour of duty—leapt from 8% to 100%. He also brought expenses down to 75% of his operating budget.

“The reward for that is my budget was then cut by 25%,” he joked, earning a laugh from audience members who work in a corporate setting.

But his first encounter with the Benfold was no joke. “When I was given command of this ship, at first I felt sorry for myself. It was dirty, morale was the pits, and the sailors wouldn’t even look me in the eye,” he told the Centurion audience.

The standard ceremony for changing command on a ship lasts about 90 minutes, with all kinds of dignitaries present and speeches given, said Abrashoff. When the outgoing commander left the ship, the crew burst into applause. It was at that moment he realized he didn’t want to be applauded off the ship when it was his time to leave, and he decided then and there to work the hand he was dealt. 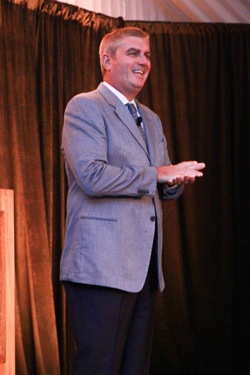 Commander retired Mike Abrashoff tells jewelers at the Centurion Show how to institute a strong leadership culture from the top.

“I can’t ask the staff to change if I don’t model that behavior. I can’t ask them to change if I don’t change. I can’t be top down and controlling,” he said. The previous commander had asked one of the ship’s officers to rate the crew’s morale. The truth was that on a scale of one to 10, morale was barely at one.  But the officer was scared to be honest with the commander, so he said morale was a four. The commander barked back, “No. It’s eight and a half or nine.”

The first thing Abrashoff did was to gather the Benfold’s crew together and tell them something they’d never heard before from a commanding officer: “It’s your ship. You own it as much as I do.” He then instructed them to look each and every visitor right in the eye and say, “Welcome to the best damn ship in the Navy.”

“I can’t sit in the captain’s chair and order excellence. I have to motivate people to want excellence,” he said.

On his first day of command, Abrashoff told the crew there were no sacred cows on board: if anyone had an idea how to do something better, he wanted to hear it.

“If your ideas make sense and I can implement it within my restrictions, I will. If it works, I’ll push to implement it throughout the whole Navy,” he told them. One such idea came from a sailor who was assigned to paint the ship, something that had to be done every other month because the bolts holding down heavy equipment were made of iron, leaving streaks of rust and dirt on the deck and down the sides of the ship. Why, he asked Abrashoff, doesn’t the Navy use stainless steel bolts, which don’t rust? With an investment of $25,000, the Navy could save a lot of money on paint and labor because one paint job would last six to eight months instead of one or two, he suggested. Abrashoff took the suggestion to his command, and not only was the idea tested on the Benfold, it was later implemented throughout the Navy.

Abrashoff also took time to meet each sailor individually and get to know them, find out about their families, and discuss their goals. Apparently no previous commander had ever asked any of them what their life’s goals were, he discovered. One sailor, who was trained as an electrician, was clearly unhappy in his job and his attitude showed it.  Abrashoff discovered he really wanted to be a social worker, not an electrician, so he instructed the sailor to find a needy school for the ship to “adopt.” He did, and rounded up the crew to paint the school and mentor the students. It turned the sailor’s attitude around 180 degrees.

In asking his crew why they each joined the Navy, he found most of them did so to be able to pay for a college education through the GI Bill. So he arranged to have the SAT test given on board the ship, and discovered that many of his crew had extremely high intelligence; well beyond the average. One woman scored 1490 out of the 1600 points then possible on the SAT.

“This is the caliber of people we have in the Navy. They just didn’t have a good socioeconomic advantage in life,” he said. 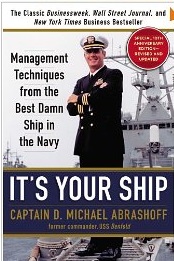 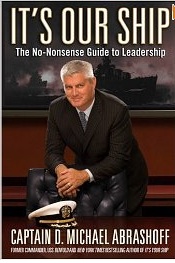 Abrashoff's first (left) and second leadership books. He joked to the Centurion audience that his third and fourth might be titled "Get Your Ship Together" and "Ship Happens."  Photos: Amazon.com

He also emphasized the importance of having fun at work. “Nobody wants to be around negative, downbeat people,” he said.  He decided to institute “jazz at sunset” nights on Thursdays, so he went to Best Buy with his US military Visa card and bought a stereo.

“We called it ‘communications equipment’ on the expense report,” he joked, one of many jokes about the workout his military Visa got while he commanded the Benfold.

“One of the sailors got the idea that our sunset jazz nights would be better with cigars. But not just good cigars; the best cigars. Unfortunately, those cigars come from a place I’m not allowed to mention and US citizens aren’t allowed to go. But you can buy them in Canada and overseas…” he trailed off with a grin.

Turning serious again, he said, “It’s important to build camaraderie and a joint sense of purpose. Today’s military is made up of honest, hard-working people who don’t always start life at the top. But that’s no reason to treat them like second-class citizens.”

When the time came to change command again, instead of the standard 90-minute ceremony of speeches, Abrashoff’s going-away ceremony lasted 45 seconds. He told the crew, “You know how I feel,” and in a turnabout of the standard procedure, he saluted them and left. He later learned in an email from an officer that there wasn’t a dry eye on board the ship when he left.

“You have to realize that your customer base and your workforce is changing and becoming more diverse. Leadership is how well we inspire people to go on the journey. When I saw my predecessor get cheered off the ship, I wondered how many times I drove people out of the military myself in the past. It was an ‘aha!’ moment. Do you want to leave to cheers or tears?” he concluded.

Next article:
AGS DEBUTS “THE PERFECT PROPOSAL”; MOVES BOARD MEETING TO SCOTTSDALE