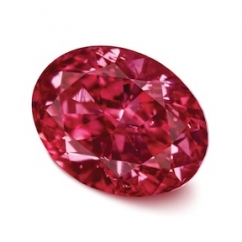 Sydney, Australia—Natural color diamonds allow luxury jewelers to offer clients something that’s both unique and that can’t be shopped online. But the window of opportunity to buy pink, purple, or red diamonds may be closing very soon, warns Russell Shor, senior industry analyst for GIA (Gemological Institute of America). Australia’s Argyle mine, the premier source of these colors, is almost tapped out. While a closing date hasn’t been announced, Shor predicts it may come even as early as 2020. Left: the 2.28-ct. oval Argyle Muse, one of the named “hero” stones in the 2018 Argyle Pink Tender, is the largest and only fancy purplish red diamond over two carats ever offered in an Argyle Tender.

“Argyle really helped put fancy color diamonds on radar,” says Shor. “Today we take them for granted because we’ve been seeing them for almost 35 years and they’ve been part of our existence that long. Rio Tinto (owner of the Argyle mine) has said before that they’re closing the mine, then they found a way to keep it open. But it seems like they really mean it this time and 2020 might be the end.”

But there’s at least one more year to acquire some top pinks, as Rio Tinto last week kicked off its 2018 annual Pink Diamond Tender tour, featuring 63 stones including a collection of six magnificent named “hero” stones of deep intense color and large size.

Until the 1980s, most consumers had heard of the Hope and might have seen a yellow diamond here or there, but generally didn’t otherwise know that diamonds come in every color of the rainbow, says Shor. That all changed in 1985, when Argyle became the leading source of pink diamonds. Meanwhile, Christie’s and Sotheby’s auction houses also began featuring fancy color diamonds in the 1980s, and in 1987 a ruby red diamond was first gemstone ever to sell for more than $1 million per carat. Then GIA revamped its fancy color diamond grading system in 1995 to make it more detailed in describing color, adding terms like intense, vivid, and deep, says Shor. All this contributed to creating a viable new category for luxury jewelers.

Argyle annually culls its top pinks from each year’s production and sells them in tender auctions. The tenders, which travel around the world, are held each fall and jewelers and diamond dealers are invited to view the stones and place sealed bids, with the winners unveiled at the end of the tour. About 1800 fancy color diamonds ranging from 0.5 to 4.0 carats, have gone through the tender in 33 years. The 2018 tender opened with a preview in Sydney last week, and will travel to Hong Kong and New York before bids close on October 10. In total, the 2018 tender’s 63 stones weigh a total of 51.48 carats, and include five fancy reds, two purplish reds, and three violet diamonds in addition to a variety of pinks. 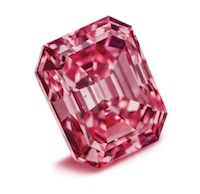 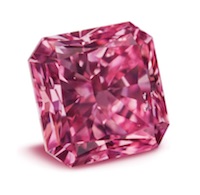 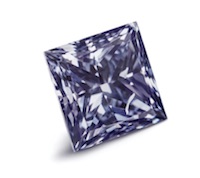 At its peak, the Argyle mine yielded 30 to 40 million carats of diamonds annually. But only a fraction of Argyle’s annual production is pink or other high-end fancies. Most of its output is exactly the opposite: lower quality small sizes in K, L, M or lower colors, typically brownish or sometimes grayish. Even as the mine played a pivotal role in establishing fancy color diamonds as a viable category for better independent jewelers, it also played a central role in the creation of a whole new category of jewelry—the $99 one-carat tennis bracelet—and hundreds of thousands of jobs. Argyle’s production essentially built India’s diamond industry into today’s colossus.

But Argyle produced only 17 million carats last year, said Shor, less than half its peak output. Despite its pinks, its overall production value last year was about $15 per carat. Most of its material—the low-end goods—isn’t appreciating much in price, while mining costs are soaring and synthetic diamonds are becoming more prevalent. All told, it’s ample justification for closing the mine.

Argyle’s closure won’t kill the low-end market, says Shor. Russia’s Alrosa mine is picking up some, though not all, of the low-end production, and a lot more is coming back through recycled jewelry. And, of course, there’s the whole new addition of synthetics that didn’t exist in commercially viable quantities when Argyle started.

But for the high end, Argyle’s closure is going to mean rocketing values on its pinks, reds, and purples, says Shor.

“What happens when Argyle closes? Pinks, reds, et cetera will become legendary stones. They’ll be named Argyle pinks in auction catalogs of 50 years from now, if not sooner.”

There is precedent for this, he says: Kashmir sapphires and Golconda diamonds.

“Today Kashmirs sell for more than double of any other sapphires. You look at that color and it can be nothing but a Kashmir. That color, plus the velvety inner glow it has, screams Kashmir. In the years to come, Argyle will probably be in that category. Most of Argyle’s pinks are purplish pinks and magnificent to look at.”

And even after 400 years, the name Golconda is synonymous with rare Type IIa diamonds, he added. Many have been recut but those that can be identified as Golconda command premiums. In 2012, a 76.02 D-flawless sold for $21 million at Christie’s Geneva. It was almost $100,000 beyond the $150,000/carat that D flawless usually sell for at auction.