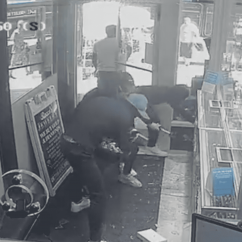 New York, NY--A smash and grab incident at a jewelry store Friday afternoon saw robbers getting away with items worth over $2 million.

A news report states that the robbery was well planned out, taking less than a minute.

According to surveillance video released by NYPD Crime Stoppers, three men — aided by another manning the door — entered Rocco's Jewelry located at 2521 Webster Avenue in broad daylight and proceeded to smash jewelry cases, taking as many items as they could before fleeing away.

The tweet accompanying the video said there's a reward of up to $3,500 for any tip aiding the investigation.

Nobody was injured in the incident.

Next article:
Signet Jewelers To Acquire Blue Nile for $360 Million