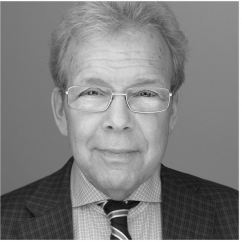 New York, NY--Jewelers of America (JA), the national trade association for businesses serving the fine jewelry marketplace, and the GEM Awards Committee announce that the 2023 GEM Award for Lifetime Achievement will be presented posthumously to Steven Kaiser. The recognition will take place at the 21 st annual GEM Awards on Friday, March 17, 2023, at Cipriani 42nd Street in New York City.

The GEM Awards gala honors the outstanding achievements of individuals or companies whose work raises the visibility and status of fine jewelry and watches. Kaiser was the Chairman Emeritus of the GEM Awards Committee prior to his passing in May. Steven was selected by the Committee to receive the GEM Award for Lifetime Achievement posthumously for his lifelong dedication to the watch industry and his support of GEM Awards.

“There is no greater honor than being able to give the GEM Award for Lifetime Achievement to Steven Kaiser. Steven was an industry icon who never stopped supporting trade organizations, watch companies and the individuals who shape them. Steven always made time for others, and we look forward to celebrating his legacy with all who loved and respected him,” said David J. Bonaparte, JA president and CEO.

Steven Kaiser was a watch industry veteran. His illustrious career spanned decades. He worked with luxury Swiss watch brand, Baume & Mercier, serving as both president and CEO. In 2000 he launched Kaiser Time Inc., a full-service consulting, business development, executive recruiting and mergers and acquisitions business that drew on Steven’s vast experience and expertise in the Swiss Watch Market. Kaiser Time quickly established a reputation for its ability to shepherd brands, retailers and industry organizations through the nuances of the Swiss timepiece industry. Kaiser Time partnered with dozens of companies over the years and was considered a go-to organization for anyone wanting to ingratiate themselves into the luxury watch market.

He went on to create Luxury Swiss Watch by JCK and consulted for The COUTURE Show. In 2020, Steven joined Kennedy Luxury Group, Australia’s finest destination for watches and jewelry with 14 retail locations, where Steven accepted the positions of CEO and U.S. president. He served on the Board of Directors of countless organizations over the course of his career, including Jewelers for Children (JFC), Jewelry Information Center (JIC), Jewelers Vigilance Committee (JVC), Jewelers Security Alliance (JSA) and GEM Awards. Steven passed away on May 20, leaving a legacy of his lifetime of achievements.

In addition to the GEM Award for Lifetime Achievement, Jewelers of America will be announcing the other GEM Award categories and nominees in the coming weeks. Sponsorships and tickets are on sale now. The 2023 GEM Awards will be a special night of celebration, glamour and networking with the who’s who of jewelry, gems and watches.

For details on the 21st annual GEM Awards, visit www.jewelers.org/gemawards.

Next article:
The Easiest Way to Create a Wristwatch with Emotion is to Explain Why You Made It