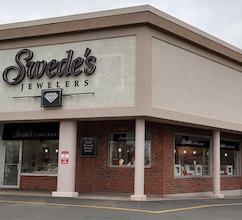 East Windsor, CT—Like many jewelers, Stanley Szwed learned to repair watches in WWII, where he served as an aviation technician in the U.S. Marine Corps. After his discharge from service, he and his wife, Alice, opened a small watch repair shop in Windsor Locks, CT in 1946, which quickly expanded into selling jewelry. Image: Swede's Jewelers today.

75 years later, Swede’s Jewelers is celebrating its diamond anniversary and is being run by the second and third generations of Szweds. The store, an AGS jeweler and IJO Master Jeweler, was recently feted in Patch.com.

Although Stanley and Alice went on to open three additional stores and branch out into other merchandise categories—luggage and large appliances—it was ultimately the original jewelry store that was the most successful. The Szweds moved the original store across the Connecticut river to East Windsor in 1974 when a downtown redevelopment project in Windsor Locks earmarked its building for demolition.

"The other stores would do well on the days my dad was there, but he was running himself thin with four places," Robert Szwed, Stanley and Alice’s youngest son and a co-owner of the business, told Patch. "Unfortunately, the kids weren't old enough yet to help out."

Stanley and Alice Szwed had eight children who moved in and out of the business at various times, but three have made it a career: daughter Elaine Ward, who is an AGS Registered Jeweler, an expert in engraving, and renowned for her taste and ability to help customers find the perfect piece. Both Robert and eldest son Stan Jr. are career jewelers as well and both are AGS Certified Gemologists. Stan Jr. also served as president of AGS’s Connecticut Guild. Another daughter, Ali Calopietro, works at the store a few days a week. Robert’s niece Amy Wentworth is making the store a career—her uncle hopes she’ll take over the business—and her niece Gabriella Szwed also is active in the business, says the Patch article.

Stanley and Alice both passed away almost a decade ago; he at age 91 and she a year later at age 92.

Next article:
Beyoncé And Jay-Z Are The New Faces Of Tiffany & Co.