Longview, TX—Lollar’s Jewelry, in Longview, TX, was recently featured in the Longview News-Journal in an article about how small business owners are faring after reopening following the COVID-19 pandemic shutdowns. The jeweler, which was founded in 1977 by James and Pam Lollar and now includes their daughter Jamie Lollar-Lane, is no stranger to tough times: the 43-year-old business survived a mid-1980s robbery, the late-1980s oil-driven downturn, and another oil-price downturn in 2010. Image: Pam Lollar and Jamie Lollar-Lane.

Mother and daughter were interviewed for the article. They outlined how they’ve been working social media since reopening. The jeweler, like many others, was forced to close for five weeks in late March, but Lollar and Lane said they’ve been pleasantly surprised by rocketing business from both old and new customers. Of course, they’re are taking extensive disinfection and safety precautions in the store.

“We spray the doorknobs and anything that is touched. It’s easy for us to keep a controlled environment because this is a smaller store,” Lane told the paper. 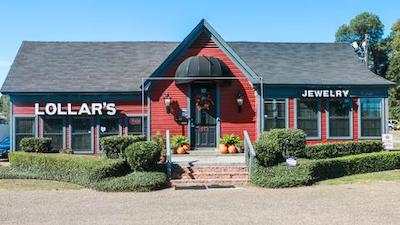 Next article:
Fish Skin for Watch Bands? Backed by LVMH