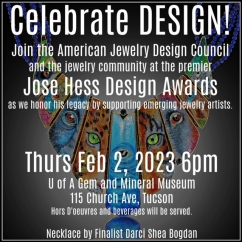 Hermitage, PA--The grand prize winner of the inaugural Jose Hess Design Awards will be named at a special ceremony in Tucson, Arizona, on February 2.

The American Jewelry Design Council (AJDC) is sponsoring the awards in the name of Jose Hess, universally acknowledged as one of the fathers of the American designer jewelry movement and the founder of the AJDC.

The Jose Hess Design Awards will be held at the University of Arizona Alfie Norville Gem & Mineral Museum at 6 p.m.

There were 80 entries who submitted designs for the awards competition. Out of this group, the finalists are:

The AJDC says the awards gala is open to anyone attending the Tucson Gem Fairs. To register for the event, contact Marylouise Sirignano Lugosch, AJDC executive director.

Previous article:
Diamonds Do Good Names New Board Members for 2023