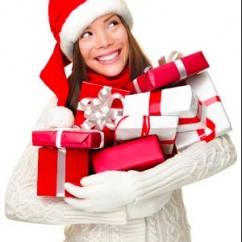 Merrick, NY—No Grinch here! The first full week of the 2014 holiday shopping season was a good one for luxury jewelers. More than one third of respondents to the Centurion Holiday Sales Success Index for the week of December 1 through 7 reported sales gains of more than 10% over last year’s figures for the same time pattern. In total, more than 60% of respondents posted gains for the week: 17% were up slightly and 7% up moderately, as well as the 35% who were up significantly.

“We had a tremendous week of business, which was reminiscent of the ‘good old days!’ Rolex and Roberto Coin were both strong sellers, but we also sold from a variety of other categories as well. Just what the doctor ordered!” wrote one respondent. Another cited a Le Vian trunk show.

“Big diamonds were a hit! Both pendants and rings,” said another.

23% said sales were down this year compared to the same period last year, and 17% said they were even. “Lots of tire kickers, no excitement yet. Customers [are] looking at bigger diamonds; if they come back this week it will be a great week.”

Most noteworthy is that the number of jewelers who said social media is the most successful vehicle in building traffic and sales has surpassed the number of those who cited traditional media. Half of all respondents pointed to it as instrumental in their success.

Among those who said traditional media is a highly successful advertising medium, print reigns, with 42% citing it. TV, radio, outdoor, and calling customers personally all were ranked about the same, with roughly 23% of respondents identifying those as highly successful, and 34% said direct mail was most helpful. (Respondents were asked to cite all successful ad media; hence, totals are greater than 100%).

Other than social media, digital got a big thumbs-down. Very few jewelers found paid search or paid social media to be useful. But, as one jeweler pointed out, all forms of advertising are synergistic. “We did all the above, and then some,” she wrote. The only thing not in this jeweler’s mix was radio.

One jeweler did particularly well by underwriting on PBS; another cited their newsletter. Other jewelers said window signage was extremely helpful and, as always, word of mouth. 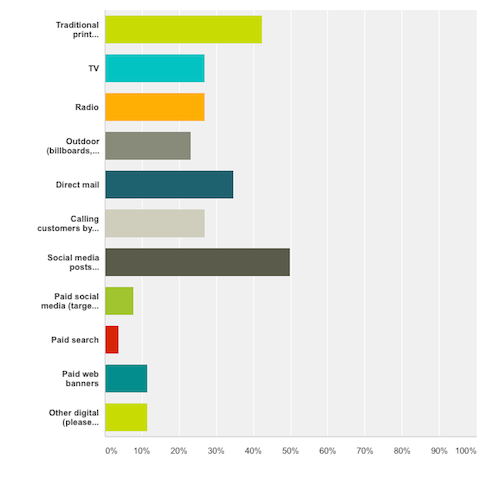 The dark gray bar shows how important social media posts have become as a marketing vehicle for luxury jewelers. Traditional print, the olive green bar at the top of the chart, continues to be an important marketing vehcile, as does direct mail, the dark teal bar. TV, radio, phone sales (light gray bar), and outdoor advertising are becoming less important. Paid search (red bar) was the least effective, said jewelers.