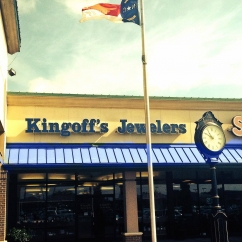 According to a news report, the family-owned business has been around for more than a century. It was initially located in downtown Wilmington and then moved to The Forum and Hanover Center. This includes the Kingoff's Jewelers clock, an iconic symbol symbol of the independent jeweler that has stood watch in front of the jewelry store as it moved throughout its history.

“That’s the last time I am moving that clock,” the store owner Michael Kingoff said in the report.

The third-generation family store was set up in 1919 by Michael's great-grandfather, Ben, who immigrated to the U.S from Russia at 11.

Per the report, Michael's parents took over the business, and he started working there in the 1980s. The store has been in its current Hanover Center location since 2009. However, the center has lost important business, leading Michael to reconsider his store's location. But it wasn't the easiest of decisions.

“Sometimes going free-standing is a little scary because you don't have all your neighbors around you for the support,” he said in the news report.

Michael told the outlet that Rhodes reached out to him about a year ago and enquired if he'd be interested in purchasing the building. He agreed.

The move's expected to be completed in mid-June. The new 3,600-square-foot space will allow Micael to display more items in his store.

This could also be the store's last move., as not many relatives of Michael are interested in taking the business forward.

“It's possible we could just end up at three generations,” he told the outlet. “Most businesses don’t make it to 100 years.”

Link to the original story.