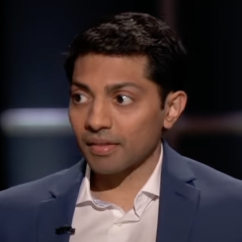 As revealed in the episode, Himmatramka agreed to give 6% of his company — which offers 20% of its net profits to charity — for $600,000 to the Canadian businessman Kevin O' Leary. Besides, Himmatramka would have to give O' Leary a $100 royalty on each sale until he made thrice the amount he'd invested in the company.

O' Leary said that he was an expert in reducing customer acquisition costs. "[T]hat’s why you have to pay more for a shark, any shark," he told Himmatramka. "But one that’s in the wedding industry you have to pay even more for. I know this space inside and out."

Himmatramka wasn't convinced. He made a counteroffer for the same investment amount at 10% of his company and with no royalty. The two couldn't come to terms.

This was when Daniel Lubetzky snooped in to make an offer — the founder of the snack company, Kind, offered to invest $600,000 for a 15% share in the company. Himmatramka didn't like the proposition and put a counteroffer at 12%.

The two eventually got to an agreement where  Lubetzky said he would put 3% or 20% of the offer to profits following a potential exit or acquisition of the charity firm.

Watch more in the video below:

Next article:
The Many Reasons Why Danielle Barber’s Favorite Gem is Tourmaline