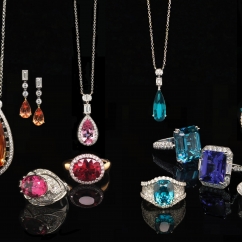 New York, NY--Shhhhhhhh. Don’t tell anyone, but tourmaline is my favorite gem. Well, okay, full disclosure: it’s a tie with sapphire, but it just won the coin toss.

There is a ton to say about tourmaline. I don’t have enough room on this page with the print getting so tiny it would be illegible, so let’s paint a broad brush stroke about this gorgeous gem.

The many colors of tourmaline. Photo credit: Suna Bros.

Everything about tourmaline is magical. It can be vivid, pastel, or neon. It can be bi-colored and pleochroic, showing different colors when viewed from different directions, or chatoyant, exhibiting a cat’s eye. It is pyroelectric and piezoelectric, electrically charged when heated and under stress respectively. In fact, if a gem-conjuring class was offered in the curriculum at Hogwarts School of Witchcraft and Wizardry, the focus of the hocus-pocus would surely be on tourmaline. Imagine a cauldron with a complex brew, where adding a pinch of this mineral or a touch of other results in an entirely different looking gem. The slightest shift in its composition–POOF! Something unique is born.

But for this crazed tourmaline-lover, the most astonishing thing is its kaleidoscopic spectrum. It can be—and is—aLL colors.

Gems like emerald, ruby, and aquamarine may be identified by a single-color range, but not this gem. Tourmaline is the most colorful of all gems. It occurs in every hue. That’s worthy of repeating with capital letters: every hue. And, added to all these hues is a plethora of possibilities with its varying shades and nuances often in the same stone!  Did I not say it was magical?

Here’s even more tourmaline fascination. Most gems are a variety of just one mineral, but not this one. Tourmaline is group of closely related minerals, all with the same crystal structure. All contain silicon, aluminum, and boron, but a complex blend of other elements give tourmaline varying physical and chemical properties, separating the gem into different species like elbaite, liddicoatite, dravite, uvite and schorl to name a few.

Tourmaline’s name could not be more apropos. It means “mixed gems,” translating from “toramalli” in Sinhalese, a Sri Lankan language. Dutch traders who first used the term to describe multicolored  gems they brought to Europe. Like so many other gems, tourmaline was often mistaken for other gems until the 19th century when it was properly identified.

We refer to some tourmalines by simply by their color, like green and pink tourmaline, while others have specific names, like the purplish red rubellite or dark blue indicolite. Canary tourmaline is a sunny yellow and watermelon is, as it sounds, pink and green like its edible namesake.

The crème de la crème of this prismatic family was discovered in the late 1980s in the Brazilian state of Paraiba. With hues described as “peacock,” “swimming pool blue,” “Caribbean,“ and my least favorite, “Windex,” (yup, like the branded household cleaner), paraiba is the crown jewel of the tourmaline family. Owing its incendiary palette to copper and manganese, paraiba quickly gained notoriety among connoisseurs, and is today among the rarest and most expensive gems in the world. Brazilian gems are referred to as simply, paraibas.

In the early 2000s, tourmaline surprised us once more with gems discovered in Nigeria also containing copper and manganese, with a similar but less intense palette to their Brazilian predecessors. One possibility could be that the Brazilian and African gems share similar geology, as South America and Africa were connected pre-continental drift, but we may never know for sure.

What we do know is that tourmaline is magnificent and available in a vast selection of hues, shapes, and sizes.  And, since everyone has a favorite color, tourmaline could easily be everyone’s favorite gem.

Read more by following this link.