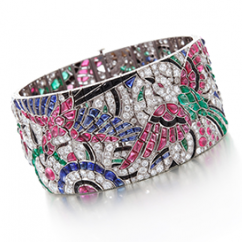 Geneva, Switzerland--Sotheby's latest auction held here this week entitled "Magnificent Jewels and Noble Jewels" sold through 146 lots of high-level jewelry. But none shone as brightly as Oscar Heyman's 1927 "Birds in Flight" bracelet (shown above left), which had a selling price estimate of between CHF 470,000 and CHF 745,000 and sold for a whopping CHF 1,441,500, more than double the high estimate.

The piece was described by Sotheby's in its auction information as "An extraordinary gem set and diamond bracelet."

"Our bracelet, Birds In Flight was the last item, sold for double the estimate, CHF 1.44 MILLION!!," said Tom Heyman of Oscar Heyman. "A gorgeous piece. It is featured in 2 books, American Jewelry, Glamor and Tradition by Penny Proddow and Oscar Heyman, The Jewelers’ Jeweler, by The Boston Museum of Fine Art.

Previous article:
The Many Reasons Why Danielle Barber’s Favorite Gem is Tourmaline