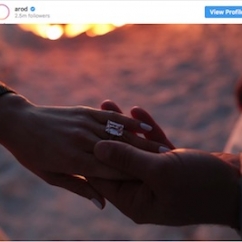 Baker’s Bay, Bahamas— Jenny From The Block? More like Jenny Gets The Rocks. Wearing his own World Series ring, baseball great Alex Rodriguez got down on one knee over the weekend and proposed to Jennifer Lopez while on a tropical getaway last weekend. While the couple, dating for two years, have not revealed any details about the ring other than that it’s an emerald cut in a simple platinum setting, jewelry experts have estimated it at 12-15 carats and placed its worth anywhere from $1 to $5 million. Reports say it was acquired abroad and Rodriguez spent seven months shopping for it. Left: Alexander Rodriguez's Instagram post of Jennifer Lopez's engagement ring.

Is J. Lo is channeling Liz Taylor? A-Rod is fiancé number five and, assuming the wedding goes ahead as planned, will be husband number four. With each successive engagement, her ring has gotten bigger.

Lopez’s first marriage, to restauranteur Ojani Noa in 1997, was marked by a $100,000 marquise-cut ring. Cris Judd, husband number two, forked over another six-figure ring, this one an emerald cut, in 2001. Both those marriages were short-lived; one and two years, respectively.

Ben Affleck, fiancé number three, gave Lopez a 6.1-carat pink diamond from Harry Winston, estimated at $2.5 million. But although he called off the Bennifer nuptials just four days before the wedding was to have taken place, Lopez returned his ring and soothed herself with Marc Anthony, husband number three and the marriage that lasted longest (eight years). He presented her with an 8.5 carat blue diamond, also from Harry Winston, estimated to be worth about twice what Affleck’s ring was.

On Saturday, the Major League Baseball Twitter account quipped, “@AROD delivers another ring to The Bronx.” A-Rod’s big-as-a-baseball ring, much bigger than Anthony’s, may not be valued quite as high because natural fancy color diamonds are still more costly. Still, say experts who’ve seen photos, it’s an exceptional stone.

Next article:
How To Target Your Competitor’s Customers With Google Ads