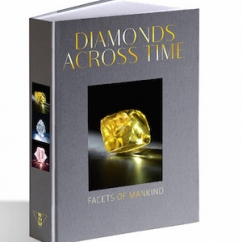 London, UK—The World Diamond Museum has published Diamonds Across Time, the first book in its series of Facets of Mankind publications. The unveiling of the book coincides with the First Virtual World Diamond Congress that opened Monday and concludes Tuesday.

In his foreword, Alex Popov, founder of the World Diamond Museum, writes, “The establishment of the World Diamond Museum marks the first step in the long journey to reignite the passion for diamonds, chronicle traditions, explore cultures, and show the eternal relevance of beauty, even in present times. This volume unites diverse stories that reveal the many meanings of the diamond and how human emotions and beliefs are reflected in its thousands of facets. The book is illustrated with incredible photographs of rarely seen gems and jewels from closely held collections and reconstructions of historical diamonds, done with the help of state-of-the-art computer technology.”

The book can be ordered on the WD Museum website shortly.