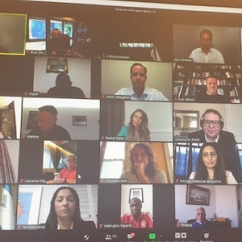 The video meeting was attended by over one hundred YD members from around the world. It was hosted by Rami Baron, president of the Australia Diamond Dealers Club and WFDB executive committee member. He was the initiator of the Young Diamantaires group, founded four years ago. The group has since grown to hundreds of members from all parts of the world.

Yesterday’s virtual meeting was attended by over 100 members. The group is extremely active, and recently launched a GoFundMe campaign to build a library and kitchen at the Renaissance High School in Messina, South Africa, which they visited last September.

Yoram Dvash, acting WFDB president, expressed his appreciation for the energies and good work of the Young Diamantaires group. “You are the next generation of diamond leaders, and the WFDB greatly values your contribution to the world diamond industry. I hope to work with you more closely in the future. I want to congratulate Rami on the initiative of creating the Young Diamantaires group.”

Baron said, "This meeting is a culmination of four years, gently guiding an inspirational group of Young Diamantaires who have a demonstrated a passion to improve their industry and assist those who are less fortunate. The WFDB, under the leadership of Yoram Dvash, has shown through this inaugural meeting that they are keen to hear the ideas and goals of this next generation and are willing to give them their support."