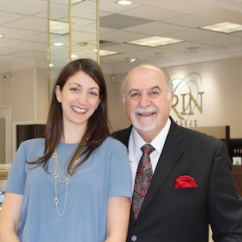 Garden City, MI—Orin Jewelers is closing its 67-year-old location in Garden City, MI and consolidating operations into its showroom in Northville, MI, about 15 miles away.

The jeweler made the announcement on its Facebook page and kicked off the consolidation August 10 with a mega-sale at its Garden City location only. Customers can purchase pieces at up to 70% off original prices until all the inventory at the Garden City location is sold out.

“This event will allow our customers to purchase what they’ve been dreaming of at incredible values,” says Orin Mazzoni Jr., president and CEO of Orin Jewelers. (Image: Orin Mazzoni Jr. with daughter Antoinette Mazzoni Kramar.)

The announcement was bittersweet for Orin Jr., 74, as he bids farewell to the store his parents founded and that he built over the past 51 years in Garden City. But he’s confident the family legacy will continue at the Northville location with the help of his youngest daughter, Antoinette.

Mazzoni Jr.’s father, Orin Sr., was a watchmaker by trade. He and his wife Mary opened their first jewelry store in Weirton, WV, at the height of the Great Depression in 1933. Orin Sr.—who left school after the sixth grade—devoted his younger years to building his reputation as a watchmaker and became an expert in his field, dedicated to quality craftsmanship and superior service at a fair price. It was the signature for which he became known.

Orin Sr. and Mary moved their family and business to Garden City, Michigan in 1953, raising their four children in a two bedroom flat above their original jewelry store. Orin Jr. jokes that he and his siblings learned the family business from the “bottom up” as he and his sisters, Caroline andJoyce, and brother, Michael, grew up working in the family store. Joyce continued to work with Orin Jr. for over 50 years at the Garden City showroom.

In 1965, Orin Sr. purchased a majestic building that once housed the National Bank of Detroit and Garden City’s City Hall, and Orin Jewelers moved in. The move gained space for the jeweler to expand its services and collections, earning it a reputation in the Detroit area for fine diamonds, jewelry and watches. 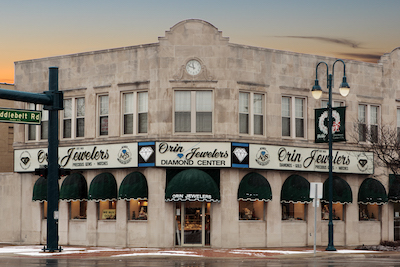 Orin Jr. took over the business in 1969 when his father retired. With the help of his siblings, he continued the family traditions, and earned his Graduate Gemologist degree from GIA in 1977. Orin Jewelers opened a second showroom in nearby Northville in 1983. Orin Jr. also served on the board of the Michigan Retailers Association for many years, and as its chairman from 2016 to 2018. But at age 74, he felt it was time to consolidate and secure the success of the next generation, with Antoinette continuing the family legacy in the Northville location. 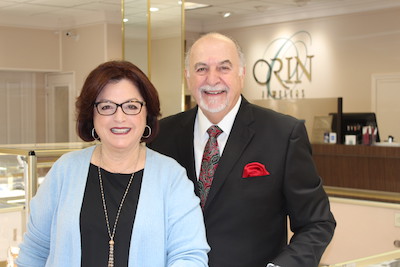 “I traveled a lot, lived in Italy and Chicago, and in 2014 my husband and I decided to move back to Michigan to raise our children,” says Antoinette. “I have always had a true love for my family’s jewelry business, and now have the opportunity to learn all I can from my dad. We are a very close family and I bounce ideas back and forth with my brother and sister.” She is currently studying for her GIA graduate diamond certification.

Antoinette’s brother, Orin III, and sister, Gina, grew up working in the family store as well. Orin III and Gina worked for the family business for over 10 years after graduating college, and are both GG’s. Both now live in California.

Orin III is a filmmaker who gained jewelry-industry notoriety with the release of his film, Sharing The Rough, an 85-minute documentary about the process of mining gemstones in East Africa. Orin III served as writer, director and producer.

Believing that “to whom much is given, much will be expected,” (Luke 12:48) the jeweler has donated to many causes with sponsorships, products, and services and offers an annual scholarship in Orin and Mary Mazzoni’s name for a graduating senior at Garden City and Northville High Schools, as well as a scholarship for incoming freshman at Detroit Catholic Central High School.