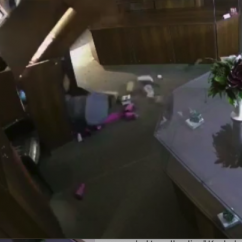 Guelph, Ontario, Canada--Thousands of dollar in jewelry were reported stolen after a three people allegedly drove a truck through the front of Silveri Jewellers on December 23.

Police said they were contacted by the owner of the store on Paisley Road near Imperial Road South around 4 a.m., CTV News reports. Watching video surveillance, Owner Todd Koebel and his wife could see a black pickup truck crashed into the store.

“I really just watched the whole thing happen on her phone as we proceeded to call police,” Koebel reportedly said.

[Surveillance video of a truck driving through the front of Silveri Jewellers. Source: CTV]

Police reportedly said video surveillance shows three males exiting a black full-size pickup truck, believed to a Dodge Ram after the driver reversed into the front of the store.

The driver is described as a white male, 5’11,” with a heavy build and wearing a light grey hoodie, light green camouflage pants, navy blue balaclava, black and white shoes and black and orange gloves.

The second male is described as white, 5’10” with a slim build. He was wearing black jacket with yellow emblem on the chest, black track pants, grey running shoes, grey gloves and a black toque. The third was described as a white male in all black clothing.