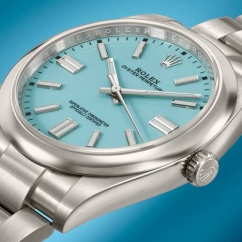 “Rolex continues to reach new heights of desirability,” said Rémi Guillemin, head of watches, Christie’s Geneva, in the news report. “And probably also thanks to a pool of new and young bidders and buyers from around the world. 51% of new bidders were millennials, showing that the market continues to open up to bidders who have never before stepped into an auction room to buy watches. 16 world records were broken, with Daytonas remaining the ‘Queens’ of the game.”