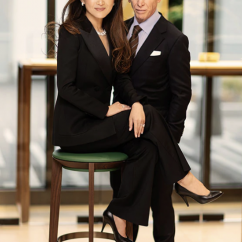 In a press release, C.D. Peacock announced the months-long succession plan for Steven and his wife, Qi, to assume leadership effective this month. They have relocated from Switzerland to Chicago as the company enters its 185th anniversary year and announces plans for one of the largest watch and jewelry stores of its kind in the flagship mansion planned for the Oakbrook Center opening in late fall.

Steven’s expertise spans three decades in the Swiss luxury watch market, working with the most prestigious retailers in Europe, Asia, and the Middle East.

“Chicagoans can expect to see C.D. Peacock fanning its vibrant feathers in new places, with unique concepts and strong luxury brand partnerships to serve future generations," noted Steven Holtzman, vice chairman, in the press release. "We’ve been our great city’s leading jeweler since 1837. Qi and I are honored to be overseeing one of the most exciting times in our company’s history,” he says.

The business plan is to incorporate global luxury concepts to influence one of the first-of-its-kind, 20,000 square-foot indoor-outdoor spaces. The flagship mansion will include a lounge, restaurant, and VIP rooms.