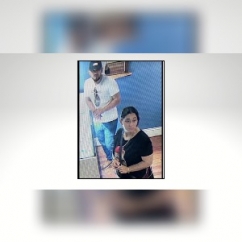 Richmond, VA--Two suspects were involved in a jewelry theft last week at a store in the 1300 block of East Cary Street.

According to a news report, the incident took place on Sept. 16 at around 1:30 p.m. A man and a woman entered the store and left after stealing several items.

The woman is described as 5'7", weight around 180 pounds, while the man is said to be of the same height and around 160 pounds. The woman was seen wearing a black shirt, white pants, black sandals, and a black shoulder bag, and the man was wearing a white t-shirt, blue jeans, and brown shoes. He also had a black baseball cap.

Anyone with information on the incident or the suspects is asked to call Crime Stoppers at 804-780-1000.