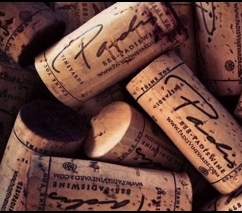 San Francisco, CA—How many jewelers can say they’ve been written up in Wine Spectator magazine?

Jewelers Steve and Judy Padis, owners of Padis Jewelry, with two locations in San Francisco, have. And the jewelers—who, as owners of Padis Vineyards in Napa, CA, also are bona fide vintners—have won multiple awards for their wines, which, at $95 a bottle, cater to the exact same kind of luxury customer their upscale jewelry business does.

At 5,000 square feet, Padis Gems’ newly remodeled store isn’t small. But it pales in comparison to the Padis’s 15 acres of vineyards. 14 of those acres are devoted to cabernet and one to syrah grapes. They produce a big rich cabernet, and Padis’s signature “Sintilation,” a proprietary blend of cabernet and syrah whose name is a riff on diamond scintillation. It’s been both a silver and gold medal winner in the San Francisco Chronicle’s wine competition. Padis also produces a chardonnay, but those grapes come from another vineyard, as they require a cooler climate than Napa. His winemaker is the renowned Robert Foley, and his vineyard manager is John Anthony Truchard.

The jewelry came first. “You cannot be in the wine business without doing some other kind of business,” says Judy Padis. From the moment the first grape vine is planted, it’s a minimum of six years before the first bottle can be produced.

“Six weeks ago, the vines were bare and brown. Now they’re lush and green,” she said. “Every year is different. It’s out of your control. Like any kind of farm, it’s in God’s control,” she says.

Steve Padis always had a passion for both diamonds and grapes. Even as he and Judy built the jewelry business, since the 1970s he dreamed of being a vintner. He read and studied endlessly, and finally realized his dream. Now, the two businesses complement each other naturally, but the Padises cross promote only selectively.

“Wine is a luxury and jewelry is a luxury. It’s a high-end wine,” Judy Padis told The Centurion. At $95 a bottle, they don’t regularly serve it in the store, though they donate bottles for charity events and have even brought some to industry events, including the Forevermark partner conclave earlier this year, and on occasion to the Centurion Show. But their wine customers get to talking—and then they become Padis jewelry customers. The Padis Vineyards website does have a section on Padis jewelry, but the jewelry site doesn’t feature the wine. And one ad in restauranteur Thomas Keller’s Finesse magazine (below) does blend the two. 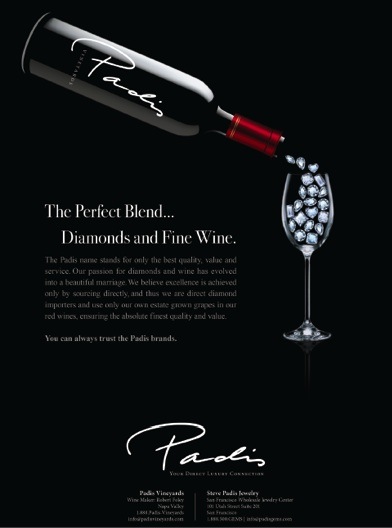 Steve Padis, caveman. Many homes have a “man cave;” a hangout room with (usually) a big-screen TV, possibly a bar, and the inevitable big comfy chair. Steve Padis, however, goes one better: he has a real wine cave that's carved out of a mountain, not a corner of the basement. He got the inspiration to build the cave after buying out a load of rare zinfandel. With 50 cases of costly bottles and nowhere to put them, he stashed them in the walk-in vault of one of his jewelry stores. Later, as one of the few private wine caves in the country, it captured the attention of Wine Spectator magazine in 2008. Read the article here.

But Steve and Judy Padis really are equally passionate about their diamonds. The jewelers are Forevermark partners, and were one of the original six to participate in the new Ritani bricks-and-clicks venture. 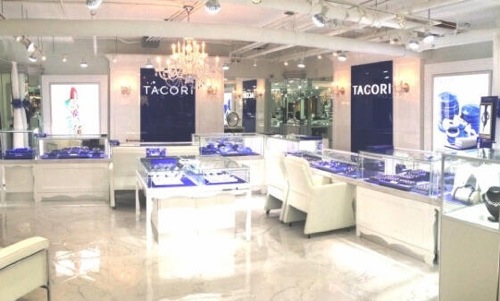 That, says Judy, has been tremendously successful. “It has a 95% close rate,” she says. Because the jeweler partner gets a percentage of any online sale made in the same zip code, they discovered a customer literally right across the street.

“This is San Francisco. All the high-tech dot-com folks are here, that’s how they shop, online,” she said. But like the mystery customer across the street—whom they’ve never met—they hope to be able to reach out and encourage him to become a brick-and-mortar customer. To that end, they’ve recently installed a 400 square foot Ritani shop-in-shop boutique. “The Ritani booth at Luxury looks almost exactly like the boutique,” she said. 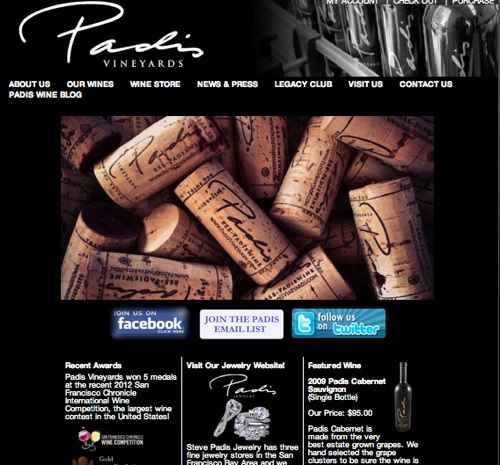 The Padis Vineyards homepage carries a link to the jewelry website, but the jewelry site (below) does not feature the winery. 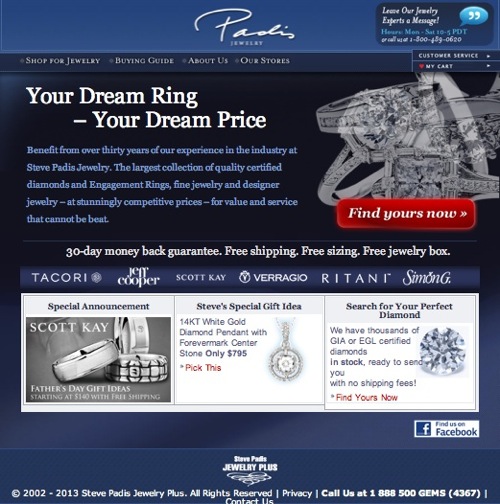 Padis Jewelry began as, and still technically is, a wholesaler—indeed, Steve and Judy met when she used to buy from him for a chain of 40 jewelry stores—but visitors to the Padis website can print out a guest pass to shop in person.

This aura of exclusivity carries through both the jewelry and the wine. Padis Vineyards are not open to the public, but the Padises have either donated wine or hosted quite a few charity events there, often with celebrity guests. For example, Eddie Money has played there for a charity event, and Creedence Clearwater Revival is slated to do a charity concert there in August. Once, the head of ESPN TV came to a charity event with a number of high-profile sports celebrities in tow. And when the vineyard donates wine to a charity, it’s in a special bottle where the dot of the Padis “i” is a diamond, a subtle nod to the jewelry.

“We get to meet these people in a casual setting, and then they become [jewelry] customers,” says Judy Padis. The vineyard also partnered with Forevermark as a sponsor of the Bay Area Emmys, which ran concurrently as part of the national Emmy Awards and honored area TV newscasters.

This summer, Padis Vineyards is partnering with RockNapa 2013, offering its members and friends special access to pre-public ticket sales to the annual festival in St. Helena, CA. On the headline this year are the Cherry Poppin’ Daddies, Blood, Sweat, and Tears, and a cover band comprised of players from Guns ‘N Roses, Edgar Winter, Chuck Berry, and more. 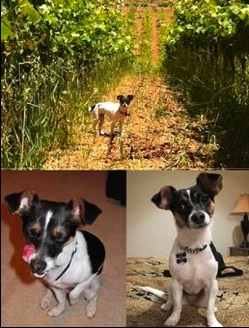 Zoe, the vineyard dog, is a rescued Chihuahua/Jack Russell terrier mix whose job is to bark at deer and gophers to keep them away from the vines. But, says the website, she’s better at keeping humans amused than keeping critters away.