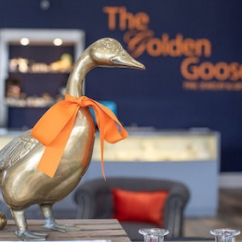 Rumson, NJ—Anthony Goltsch, owner of The Golden Goose Fine Jewelry & Gifts in Rumson, NJ, has been charged with theft after failing to return or pay for jewelry that customers left for consignment or redesign.

Centraljersey.com reports Goltsch was charged with second degree theft by failure to make required disposition of property received, citing a press release from the Monmouth County Prosecutor’s office. If convicted, Goltsch faces a sentence of five to 10 years in state prison.

The Golden Goose’s website prominently features jewelry repair and custom design services, headlined “Services You Can Trust” and touting “relationships with some of the finest goldsmiths and diamond cutters in the world.”

The website doesn’t feature any jewelry brands, but it names distinctly high-end gift brands such as Juliska, Herend, William Yeoward, and Hermès.

A joint investigation by the prosecutor’s office and Rumson police turned up three Golden Goose customers who said they left pieces with the jeweler for either consignment or redesign, but have not received any sale proceeds or gotten their jewelry back despite repeated requests.

Centraljersey.com says anyone who has information regarding the Golden Goose is asked to contact Detective Michael Acquaviva of the Monmouth County Prosecutor’s Office Financial Crimes Unit at (732) 431-7160, ext. 2233, or Rumson Detective Donald Schneider at (732) 842-0500.

Separately, two diamond rings were stolen from Kay Jewelers in nearby Holmdel, NJ, also in Monmouth County, over Labor Day weekend. Patch.com reports a white male in his mid-30s asked to see two engagement rings valued at $9,000 each, then took them off the counter and fled the store.

Holmdel police were assisted by Hazlet Township police and their K-9 unit. Police say the suspect has short blond hair and tattoos on both upper arms. He was wearing a gray T-shirt, black sweatpants, and a black New York Yankees baseball hat. Anyone with information is asked to contact investigating officer Ptl. James Corrigan at (732) 946-9690 ext. 1888.