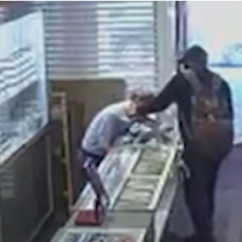 Wilmington, DE--An Asian jewelry store owner was brutally beaten during a robbery of his business in downtown Wilmington on September 15.

Surveillance video shows 68-year-old Chang Suh being pistol whipped, kicked multiple times and even hit with a hammer, even after he was on ground. The thief has been identified as Calvin Ushery, 39, who is in custody on a 1st-degree robbery charge as well as other offenses, according to the news report. There is no word on how much was stolen from the Solid Gold Jewelers store on 9th Street.

Chang's two sons feel the charges should be stronger as they believe their father was likely a victim of Asian hate. David Suh, an Army veteran who served in Afghanistan and Iraq, is still shocked by the unprovoked violence against his father, according to the report.

"I think it had to do with Asian hate. You don't have that level of violence without hate," he told channel 6 Action News in Philadelphia.

Next article:
C.D. Peacock Promotes Olivier Stip to President and Adds Adam Woitkowski as its first VP of Retail