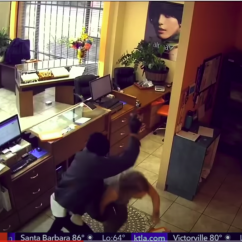 The gunmen rushed in, weapons drawn, as an employee and customer crouched down in fear.

One robber confronted Pereda and started pistol-whipping her in the head after she set off the alarm.

[Screen capture from the KTLA video]

“He said, ‘Hell no!’ and he came in straight with the gun very close to my face, and I defended myself,” she said. “It’s a miracle. He was ready to kill me.”

The robbers, who Pereda reportedly said were dressed as an Amazon delivery man and a security guard, fled with thousands in jewelry.

See the full report, including video.

Next article:
Sotheby’s to Auction 303-Carat Yellow Diamond in December