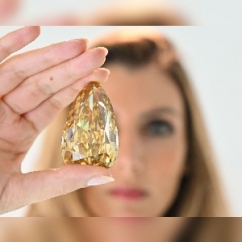 The auction, per a report, will take place in December, with bids starting at $1 million. The report notes that the diamond could fetch $15 million at the auction, per the house's estimates.

The diamond is known as the Golden Canary and has a rich brownish-yellow tone. The gemstone is touted to be one of the largest diamonds in the world that is cut and polished. It's also the largest flawless or internally flawless diamond graded by the Gemological Institute of America (GIA).

The pear-shaped diamond comes from a 407-carat shield-shaped piece known as the "Incomparable Diamond," which was found in a rubble pile in the Democratic Republic of Congo in the 1980s. The original was an 890-carat rough diamond.

The rough piece was first showcased in 1984 at the Smithsonian National Museum of Natural History. Over five years, the diamond was cut into 15 separate stones, with the largest one being known as "The Incomparable."

"Steeped in history, the Golden Canary is one of the most exquisite diamonds to ever be discovered, not only for its sheer size and intensity in color, but for its stunning beauty that is sure to captivate collectors around the world," Quig Bruning, head of jewelry for Sotheby's America's, said in a statement, per the report.

The Golden Canary auction will take place on December 9 at Sotheby's in New York.

Learn more in this news report.

Next article:
What Is a Harlequin Opal? GIA Explains