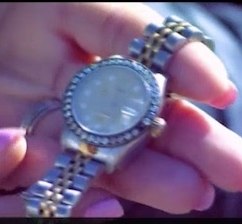 Dropping one’s cell phone in the toilet is somewhat common, but losing a wristwatch down the loo? Not so much. Yet that’s exactly what happened to a California woman whose $8,500 Rolex slipped off her wrist and went down the drain as she was flushing the toilet in November 2016, NBC4 Los Angeles reports.

Celia Twiford immediately called two plumbers as well as the city of Chino Hills, but was unable to retrieve the precious timepiece, a wedding gift from her husband, Jason. The sewer line from the Twiford’s home runs downhill, ensuring that anything in the water will rush away immediately.

Devastated, she never expected to see the watch again. But 18 months later, it resurfaced in a manhole about a half mile from the Twifords’ home. Carlos Diaz, a Chino Hills city worker, found it stuck in a pile of debris and muck in the manhole where two sewer lines merged. Coincidentally, Diaz had been on the first call about the watch in 2016, so when he found it he immediately knew whose it was. Plus, as he wryly observed, “there aren’t too many Rolexes floating up out of the water.” He cleaned up the watch to the best of his ability and reunited it with its grateful owner.

The watch, meanwhile, still works even after 18 months in the sewer, and it was almost fully intact, missing only one stone from its diamond bezel.

While cleaning out the muck-filled manhole, Diaz also found a gold ring inscribed “With God all things are possible.” At press time, the ring had not been claimed, although the local TV news station did describe it in the on-air report.

Click here or on the image below to watch the NBC4 report. 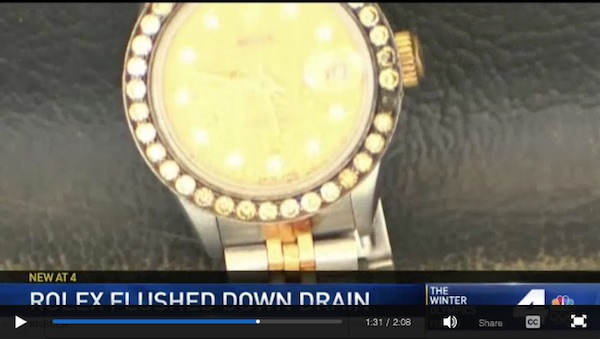