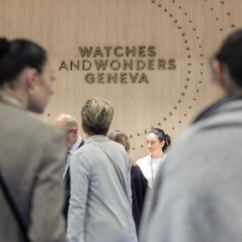 Geneva, Switzerland--Watches and Wonders has a new chairman in Rolex CEO, Jean-Frédéric Dufour, as it draws out plans for 2023, which include expanding to 49 brands from 38.

[Image via Watches and Wonders]

The press gets exclusive access to the weeklong event during its first few days — from March 27 to 31 — before it opens to the general public for the weekend.

Tickets for the event go on sale in February and are priced for the public at CHF 70 (around $70).

According to a report, the show's organizer, the Fondation de la Haute Horlogerie, a nonprofit organization, has been renamed the Watches and Wonders Geneva Foundation. Besides Rolex CEO as the Chairman, Emmanuel Perrin, the head of Specialist Watchmakers at Richemont, will serve as vice-chairman. Fondation de la Haute Horlogerie's current CEO, Matthieu Humair, will be the CEO of the Watches and Wonders Geneva Foundation.

The event message, per the report, remains the same for the organization: "to promote watchmaking excellence worldwide by organizing in-person or digital watch and jewelry exhibitions in Geneva and beyond".