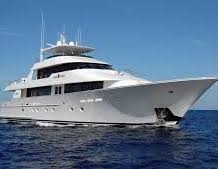 New York, NY—The world’s ultra wealthy population remained flat in 2015, as the number of individuals with US$30 million or more in net assets grew just 0.6% and total ultra high net worth (UHNW) wealth increased by 0.8%, according to the latest World Ultra Wealth Report released last month by Wealth-X. But the ultra-rich control 12% of the world’s wealth, making their impact far greater than their numbers (0.004% of population).

The greatest growth in ultra-wealth value was in Asia (3.9%), even accounting for the slowing Chinese economy. The Americas, meanwhile, still boast the greatest percentage of the world’s ultra-wealthy, although growth in the region was a modest 1.5% last year. Europe and the Middle East declined.

New York, London and Tokyo remain the top ultra wealthy cities; the chosen homes for one in 10 of the world’s UHNW population. But a number of Asian cities, as well as Rio de Janeiro and São Paulo in Brazil saw sharp growth in UHNW individuals. 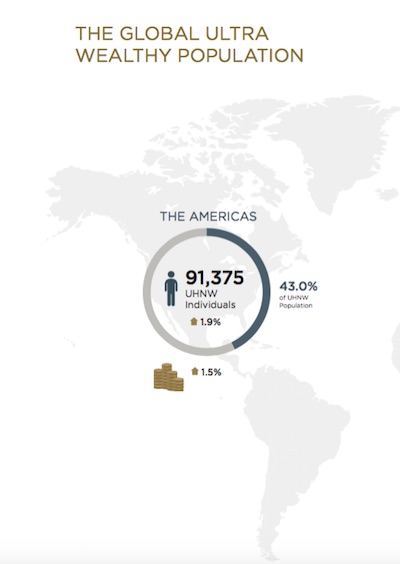 43% of the world's wealthiest individuals live in the Americas, which represents the greatest concentration of ultra-high net worth individuals in the world. Chart: Wealth X.

By gender, the female UHNW population remained steady at 13%, but its share of total wealth fell from 14% to 11% this year, with the average female high net worth wealth dropping from US $147 million to US $126.3 million. Wealth-X’s report attributes this to a higher reliance on inherited wealth and a greater allocation to cash, a drag on returns in an ultra-low interest rate environment. Male wealth, meanwhile, rose 2.4% from US $139.8 million to US $143.1 million, which Wealth-X says reflects greater focus on self-made wealth and a higher-risk asset composition.

Across all regions, it is the highest ranks of the UHNW population who are experiencing the most success: billionaires saw their wealth grow 5.4%, while collectively other tiers saw their wealth shrink by 0.6%.

Finance, banking and investment are where most of the ultra wealthy work, but manufacturing has grown in importance, says the report. But something that hasn’t changed: in two out of three cases, wealth is self-made rather than inherited. (That being said, however, as wealth matures in younger economies, Wealth-X says the transfer of wealth has seen a growing class of second-generation ultra wealthy emerge.)

While there are multiple examples of high-profile Millennials who have achieved great wealth, less than 1% of the world’s ultra wealthy population is under 30, and they control only 0.3% of its wealth. Not surprisingly, Wealth-X’s report says the average UHNW individual is male, married, and in his late 50s.

But interestingly, it’s the seniors who really have the cash: while taken as a whole, UHNW individuals in their 50s and 60s make up the lion’s share of this market, those over age 80 are individually worth nearly double that of the average UHNW individual globally, and seven times wealthier than those under age 30. 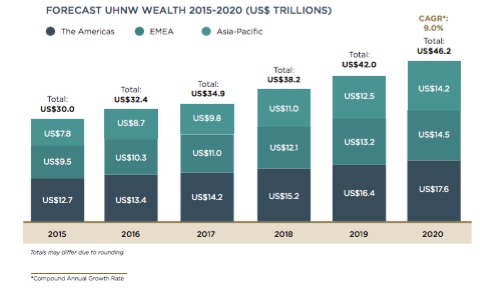 Where the wealth is forecast to be for the remainder of this decade. Chart: Wealth-X

In the United States, the UHNW population and net worth fell slightly—but it still remains the single largest source of UHNW individuals in the world. With almost 70,000 individuals falling into the ultra-high net worth category, about one-third of all UHNW worldwide are American—more than the next five countries combined. About one quarter of the ultra-high net worth assets in the United States are held by billionaires.

What was the cause for the slight dip in U.S. ultra-high net worth? According to Wealth-X, about one-fifth of those individuals derive their wealth from the financial sector, and the S&P 500 financial sector dropped 3.5% over the year as energy losses and limited scope for increased revenues dampened earnings forecasts. But for the ultra wealthy in other sectors, 2015 was a positive year as the S&P 500 consumer discretionary sector was up 8.4%—its seventh consecutive annual rise. But the U.S. population of ultra-high net worth individuals has grown almost 20% since 2011, and its wealth has risen more than 25% in that time.

Next article:
The Month In Review: October