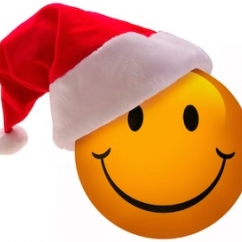 New York, NY—Consumers are feeling fairly confident, both gasoline prices and unemployment are low, and the stock market is roaring to record highs. Back to school spending was projected to grow 10% over last year, and the National Retail Federation says Halloween spending is way up, too, reaching $9.1 billion (up from $8.4 billion last year). Even in the aftermath of devastating hurricanes and fires, consumer sentiment in a University of Michigan study this month was much stronger than analysts ever expected.

All this bodes well for a good, strong holiday shopping season. Indeed, most major retail analysts are forecasting it will be, with sales gains ranging from 3.5% to 4.5% over last year’s results. A survey from PriceWaterhouseCoopers shows most shoppers are planning to spend at least as much as last year, if not more, this holiday season.

With all the indicators pointing in the right direction, there’s nowhere to hide and nobody to blame if sales miss the mark, says this report on Bloomberg.com. Retailers can no longer point to shoppers still in recession-recovery mode or fearful of a downturn looming: if they can’t sell through this season it’s a reflection of their own merchandising, marketing, and/or digital missteps that are not resonating with consumers. Yes, lower-income shoppers are still squeezed by stagnating wages and aren’t as likely to gain from the stock market’s strength, but everyone else is in good shape and all indicators show they’re not averse to spending, says Bloomberg. 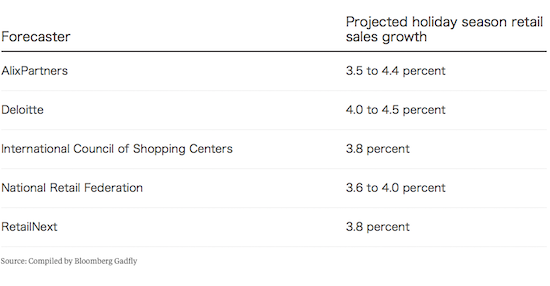 Holiday sales projections range from a 3.5% gain to 4.5%. Source: Bloomberg.com

Separately, the flagship Lord & Taylor store on Fifth Ave. from 38th to 39th Streets in New York City is changing hands. Hudson’s Bay, parent company of Lord & Taylor, announced Tuesday that the landmark building that has housed the department store for more than 100 years has been sold to WeWork, a seven-year-old office-sharing startup company.

It’s a classic tale of the clash between old and new: With its grand Renaissance-style architecture and arched entryways, the flagship Lord & Taylor is one of the few remaining monuments to the grand era of the department store. But the chain, like many others, is struggling for a foothold in the e-commerce era.

WeWork, meanwhile, features open-concept flexible workspaces that anyone from an artist to an entrepreneur can rent for as long or as short as necessary. Catering to Millennials, WeWork locations—more than 160 in 52 cities now—are designed to foster collaborative environments and typically feature modern industrial loft-style design and many of the comforts of home, including well-stocked kitchens. The Lord & Taylor building will house WeWork’s global headquarters as well as shared office space.

Lord & Taylor, meanwhile, will lease back about one-fourth of its former building (below) and operate a much smaller retail emporium, much the way John Wanamaker (now a Macy’s) did with its Philadelphia flagship before the chain folded. Macy’s retail selling area occupies less than half the original Wanamaker’s store; the rest of the building is office and event space. 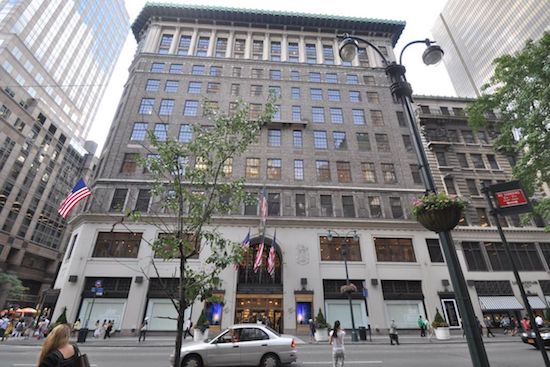 Lord & Taylor will occupy about one-fourth of its current flagship store; the rest of the space will be global headquarters of WeWork. Image: Curbed NY

Next article:
Rahaminov Diamonds Raises Over $60,000 for Jewelers for Children