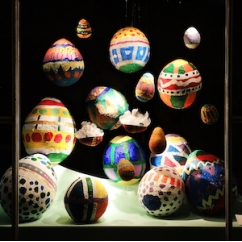 Küsnacht, Switzerland—For 29 years, Swiss-born goldsmith Christoph Krähenmann lived and worked in California before returning home to his native country in 2010 and opening an eponymous gallery in the Zürich suburbs. There, he is becoming as well known for his creative window displays as for his handmade jewelry.

His most recent window (left), featuring an Easter theme, incorporated something he’d wanted to try for a long time: letting children’s creativity loose. “For a long time I had a dream that children could create something for my window. Luckily this opportunity presented itself to me. The teachers, the school board, and even more, the children were so excited to create Easter eggs for me,” he says.

25 children from a nearby school first designed their ideas on paper, then created the eggs from plaster on balloons. When dry, the children painted their designs in acrylic paint.

Krähenmann was involved with the project throughout. “Many hours I spent with them, and enjoyed every minute observing them. What a wonderful experience!”

But the eggs are just one of a long line of windows the designer has created using ordinary objects. His displays rarely use traditional jewelry stands; instead, he works the pieces into a themed display inspired by everything from air fresheners to the snow-covered Alps to making the best of annoying road construction. 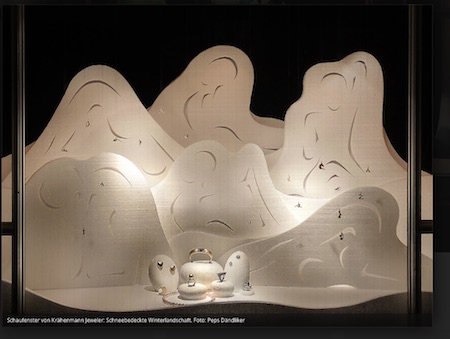 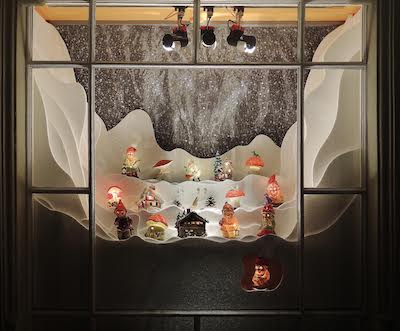 The dwarfs, mushrooms, and snow-covered houses in Krähenmann’s 2016 holiday display (above) are approximately 80 years old, says the designer. In German, they are called rauchverzeherer, meaning air fresheners. Perfume was added to the figurines to neutralize the odor of cigars, pipes, and cigarettes in rooms where those were smoked.

“I happened to see some of them at the home of friends, who have most likely the largest private collection of these wonderful and funny small lights of joy,” says the designer. The little dwarves were amusing to both adults and children, who loved to touch his window, he says.

In 2013, he turned to his window to deal with the frustration of ongoing road construction impeding the entrance to his gallery. After catching a glimpse of the mess reflected in his window, he used bits of concrete, cobblestones, rusted pipes, rebar, a stuffed buzzard, and barrier material to create an innovative display in keeping with the theme outside. 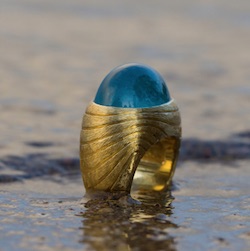 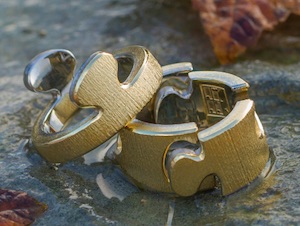