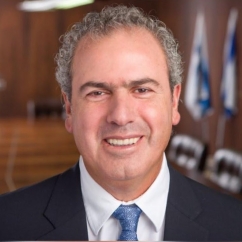 Antwerp, Belgium—Hundreds of attendees from around the world logged on to the opening and closing sessions of the World Diamond Congress held online Monday and Tuesday.

The opening session of the 2020 Congress, titled “Diamonds in the Next Normal,” addressed the changes in the diamond and jewelry world and the need to adapt to them. Featured speakers were Yoram Dvash (image), the newly-elected president of the World Federation of Diamond Bourses; IDMA president Ronnie VanderLinden, CIBJO president Gaetano Cavalieri, and WDC President Edward Asscher. Kim Pelletier, new CEO of Get Diamonds, the online diamond platform of the WFDB, also presented the site's achievements and future plans.

Dvash said that although the coronavirus pandemic made 2020 a very challenging year, diamond demand is returning to major markets. But he stressed that the problems of the diamond industry were not only caused by the virus.

“The industry has been suffering from a lack of profitability, a shortage of financing, and reduced demand. It needs to transform to meet the demands of the twenty-first century. That means adopting the values of the day: transparency, sustainability and consumer confidence. It means working together with regulators to create rules and measures that benefit all.”

The Congress closed with a presentation by Peter Karakchiev, head of international relations for ALROSA, who outlined the new System of Warranties the World Diamond Council will be launching next year.

Karakchiev listed the current challenges the industry faces, including conflict diamonds (still), complex government regulations, access to finance, new generations of consumers with new product requirements, increasing competition from other sectors, and undisclosed lab-grown diamonds in the pipeline. The industry needs to ensure responsible business conduct and closer collaboration with both NGOs and civil society, he said.

The original System of Warranties was created by the World Federation of Diamond Bourses and IDMA (together forming the WDC) in 2000, to support and strengthen the emerging Kimberley Process Certification Scheme and become the cornerstone of industry self-regulation. In 2018, the WDC set out to adopt a new and improved industry self-regulation system covering an expanded, industry-wide scope of compliance areas and incorporating universal basics in supply chain responsibility. WDC is preparing a self-assessment toolkit for every sector of the supply chain from mine to market.

The main sessions of the Congress were recorded and can be seen on the WFDB YouTube channel .