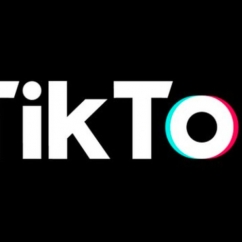 Merrick, NY—Two years ago, “tick tock” meant the sound a watch or clock makes. Then came TikTok, a Chinese-based short-form video app that took the world by storm.

Originally launched in 2016 as Douyin in China, it was renamed TikTok a year later. Then its merger with Musical.ly in August of 2018 made it available worldwide and it quickly became one of the most popular social platforms among Gen-Z. Users are encouraged to upload short videos (15 seconds, on average) although it is possible to create and share 60-second “Stories-type” videos.

JewelryEcomm.com’s Mike Hauben took an in-depth look at TikTok and evaluates whether advertising on it makes sense for jewelers. Hint: it’s pricey, so read Hauben’s full take here before you say yay or nay to paid advertising.

But advertising is only one option brands (or jewelers) have to create a presence and get noticed on the app. They also can create their own channel and upload relevant videos, just like they would do on YouTube; or they can work with influencers to spread content to a broader audience (again, read Hauben’s article first before committing dollars.)

TikTok has been in the news lately because the Trump administration is threatening to ban it from the United States, if its U.S. operations aren’t sold to an American company before September 15. (Microsoft is rumored to be the leading bidder thus far.) The administration’s security concerns are not unfounded—as Hauben points out, Facebook knows A LOT about its users—but NPR says TikTok’s owner, ByteDance, is challenging the executive order as unconstitutional and is planning to sue the Trump administration.

Meanwhile, TikTok’s popularity—which rocketed even higher during the pandemic—drove Instagram to launch its own version of a short-form video platform, called Reels. Reels also features 15-second looping videos with music, filters, and special effects, and the ability to stitch together multiple clips to create a montage.

Back to the original question: should jewelers even bother with either of these, or with older forms of video such as Facebook or YouTube?

The answer, of course, depends on each jeweler’s needs and target audience. TikTok is immensely popular with younger consumers. 41% of its users are between 16 and 24, and 66% are under 30. And jewelers who have used Facebook or YouTube videos have done well with them. So it’s probably worth having a video presence of some kind.

And if you’re going to have a video presence, you want to do it right. Platinum Guild International’s U.S. team recently compiled a simple one-sheet with tips for doing the best videography you can on your own. The good news: you don’t need a fancy setup, just a good smartphone and some common sense. 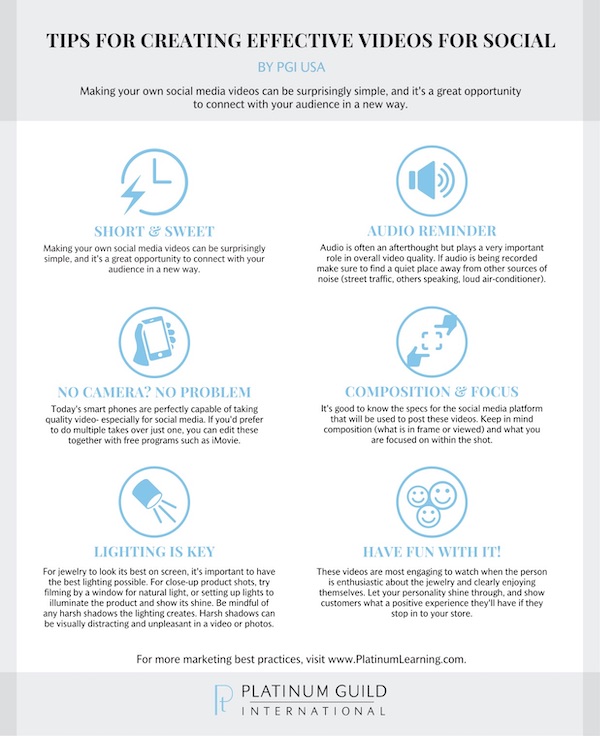 Rebecca Moskal, who handles communications for PGI, makes some additional recommendations for shooting a good video:

Shoot in portrait mode if it’s a quick, less than :30 video. Flip your phone 90 degrees and shoot in landscape mode if it’s going to be a longer video of several minutes. “I’ve read a bit of research on this topic and my personal preference seems to be what studies show is the norm,” she says.

To get even clearer audio, use an external microphone. They’re readily available and typically plug into the phone’s headphone jack. “There really is no comparison, plus even the cheaper models will aid with buffering ambient noises like echoes, wind, et cetera,” says Moskal.

Finally, consider investing in a tripod. “It takes the video to a whole other production level. It also allows you, the interviewer, to focus on the task at hand, instead of also trying to play the AV role,” advises Moskal.

Separately, PGI reminds jewelers to check out its Platinum Resource Center, which contains industry-specific tips on a wide range of topics, including:

All of the information from PGI’s educational email series, plus a host of consumer-facing education, is available online any time in the Platinum Resource Center.