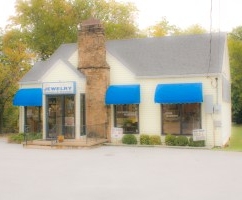 Rogers, AR—Al McCarty Jewelers, a 105-year-old store in northwest Arkansas, is proof that there is life beyond brands, and that the less-than-glamorous back end of the shop can be a very lucrative point of differentiation at the front end.

The store, now being run by fourth generation A.V. McCarty IV, was a two-time winner of the Northwest Arkansas Democrat Gazette’s Best of Northwest Arkansas, in 2018. The store won for “Best Jewelry Store” and “Best Place To Buy A Gift.” McCarty says the focus of his business is in repairs, customization, and mounting.

The jeweler also was recently profiled in an article in the Pea Ridge Times.

McCarty has the tools and resources to fix almost any type of jewelry imaginable, and does everything on the premises.

"I've got to see it first, but I can fix almost anything," McCarty said. "I've now got a laser welder that can help me fix costume jewelry that I used to not be able to fix. I can also do eyeglasses now."

"If you bring in all your old jewelry, we'll put it in something new. We'll find a ring or pendant or earrings and put your stones into it," McCarty notes. Or, he can do casting--melting down your old gold and creating a completely new piece of jewelry.

A.V. McCarty Sr. opened a watch repair shop in 1915 in downtown Helena, AR, and his shop was especially important as the official railroad watch check center. In those days, it was absolutely essential that railroad watches were exact, as their timing was used to keep the trains from colliding. A.V. retired from the business in 1940.

Alto McCarty, Jr., the second generation, started working as a watch repairman around 1925 in his father’s store. He and his wife, Jane, added gifts and jewelry in 1938, and opened their second store—a full-line jeweler offering diamonds, watches, jewelry, china, crystal, silver, and giftware—in Helena in 1946. He retired in 1975.

Third generation Al McCarty III became a full-time jeweler in 1960, also doing watch and jewelry repair. He and his wife, Carolyn, opened their first store in 1971 in West Helena, AR. The second location closed in 1975 and, in 1978, they bought Brinks Jewelry and moved to Rogers. Al III retired from daily operation of the business in 2010, but Carolyn remains in the store working with their son, A.V. McCarty IV, who joined the family business full-time in 1999, learning to repair watches and jewelry under the close supervision of his father.

A.V. IV also is an active member of the community, with the Chamber of Commerce, Benton County Ducks Unlimited, The Rogers Public Education Foundation, and was president of the Rogers Optimist Club in 2008 – 2009.

Ironically, despite the store’s origins as a watch repair shop, watches are just not A.V. IV’s thing. Beyond batteries, bands, and links, he sends all other watch repairs out.

Next article:
Do You Need a Trainer or a Coach?