Scottsdale, AZ—Jewelers For Children added more than $27,000 to its till following a series of fun- and fund-raising events during the Centurion Show. The events benefiting the charity were a Super Bowl 50/50 football pool that raised $7,200 for JFC; the annual Silent Auction, which ran from Sunday, Feb. 3 through 2 p.m. Tuesday, Feb 5., and netted almost $20,000 between bids and cash donations; and the final event was a casino/poker night held Tuesday, Feb. 5 that raised another $5,000. Like the football pool, the casino night was a 50/50 split with JFC. Participants could buy in for $50 for table games and either $50 or $100 for the annual Texas Hold ‘Em poker tournament benefiting JFC. 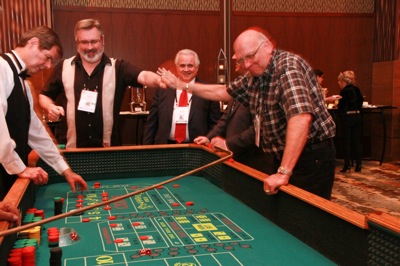 Winners high-five it at the craps table, above, and the roulette table, below. 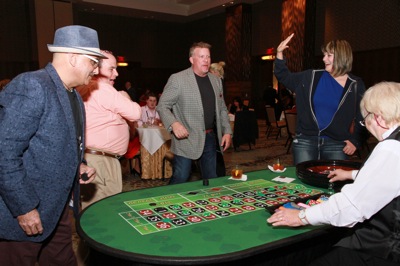 “This [show] is a productive time for us, not only in terms of fund raising but because it gives us a chance to talk to people about other creative fund raising ideas they can do in their stores,” says JFC executive director David Rocha. “We often hear retailers say they want to do something in their store but they don’t know what, so here we can brainstorm ideas or they can hear about what other stores have done.” 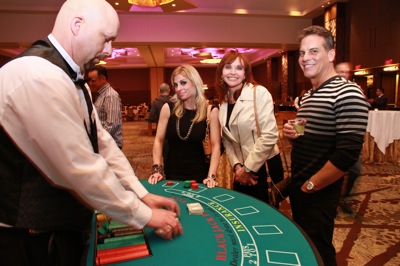 Above: Team Guarino from Louis Anthony Jewelers in Pittsburgh get ready to try their luck at black jack to benefit JFC. Below, serious concentration from Sonny Sethi of Tara Pearl and David Zar of Le Vian. 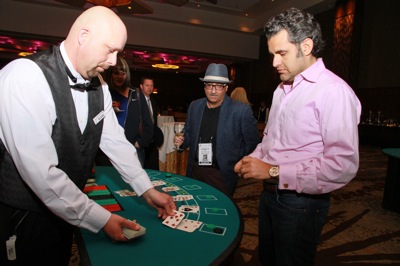 Rocha shared some other plans for JFC with The Centurion. The big focus is of course on the charity’s annual Facets of Hope dinner in Las Vegas, which this year is celebrating its 15th anniversary and a total of $40 million raised.

Also in Las Vegas, JFC is planning its first “Rings of Strength” 5K tour. It will be held May 30, with “something for everyone,” says Rocha. There will be a bicycle event, a run, and a walk. Like other athletic fundraisers, participants can go to the JFC website and set up their own fundraising page and enlist sponsors for their participation.

Rocha says the event is geared toward people who want to participate but don’t necessarily want to attend or be major sponsors for the big Facets of Hope dinner. But he acknowledges it is geared to early risers—the race kicks off at 5:30 a.m., outside the Mandalay Bay.

“It’s an early start Thursday, but we need it to be early to both beat the heat and make sure everyone is finished in time to shower and get on with their day,” says Rocha. While the JCK Show doesn’t open until Friday, both the Couture Show and Luxury by JCK are open Thursday.

Another new initiative for JFC is its first-ever reception in New York, set for February 25 in conjunction with the winter JA show. It will be held at The Lighthouse at Pier Sixty, on the Chelsea Piers. There will be a live auction that evening, and a silent auction being held at the JA Show on Sunday and Monday will move over to the event for its conclusion. The Gen-Next jewelers group is organizing the silent auction; Deborah Puzio of QVC is organizing the live auction.

But JFC encourages ongoing participation all year long at the local level, says Rocha. JFC has worked to develop programs to appeal to different people in all parts of the industry. The Facets of Hope dinner of course draws the high-level industry members, but store employees can get involved by doing the walk in Las Vegas if they’re attending the shows, or if not, by joining the Hero for Hope employee giving campaign in their own store.

“It’s amazing how excited employees get on the local level to be part of the effort to help kids,” says Rocha.

Previous article:
FROM FAILURE TO BILLIONAIRE: BEN & JERRY’S FOUNDER ON THE IMPORTANCE OF CREATIVITY AND INTEGRITY