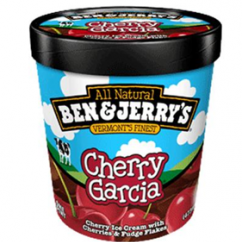 But the success of Ben & Jerry’s Ice Cream began as a lesson in repeated failure, said Jerry Greenfield, a keynote speaker at the 2013 Centurion Show.

“Ben enrolled at Colgate University, because the dorm rooms had fireplaces and he thought that would be cool to have a fireplace in his room,” Greenfield told the audience. But Cohen dropped out of Colgate and three other colleges, including even the “University Without Walls” which credits life experiences instead of classroom instruction. He went through a series of odd jobs as well.

Greenfield, meanwhile, had graduated college pre-med, but having been rejected by a dozen medical schools, went to work as a lab technician in hopes it would boost his chances on his next round of applications. It didn’t.

The two friends decided, somewhat on a whim, that it might be fun to make ice cream for a living. They took a correspondence course in ice cream making from the Pennsylvania State University creamery and earned top marks—a feat Greenfield laughs wasn’t terribly hard with an open-book exam.

The two friends, armed with their newfound knowledge and second-hand commercial ice cream equipment, decided to look for a warm rural college town to set up shop. Their reasoning was simple: college students love ice cream, and when it’s hot, everyone wants ice cream. The only flaw in their reasoning was that they were absolutely right, and someone had already beaten them to it in every warm rural college town they tried.

So they settled in Burlington, VT, a cold-climate college town with no ice cream parlor.

Armed with $8,000, the two set out to get a bank loan, which, as one might guess, was initially unsuccessful. But a friend who had worked for the Small Business Administration gave them a successful business plan from a small pizza shop as a model for their plan. Everywhere the plan said “slice of pizza,” they crossed it out and wrote “ice cream cone.” The bank resubmitted the plan to the SBA, which apparently had liked it enough the first time around (and obviously didn’t seem to recognize it) that they approved it for Ben & Jerry’s, contingent on a multi-year lease for space. In the end, the bank lent the two $4,000, which meant re-jiggering the business plan, but that’s what the two did, renovating an old gas station with the cheapest materials they could find.

The ice cream shop was a success—till winter, when demand for ice cream fell along with the temperature. But they made it through the winter with some clever weather-related price promotions and sales to area restaurants. 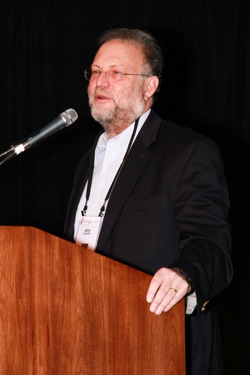 Jerry Greenfield addresses attendees at Centurion 2013. At the top of this page, "Cherry Garcia" is Ben & Jerry's best selling ice cream flavor. New flavors go through a rigorous selection process before going into production, with only about one in 30 making it out of the lab, said Greenfield. In a riff on the famous line "many are called, few are chosen," he said at Ben & Jerry's, "many are called but few are frozen."

A year later, still in business but facing another winter, Cohen got the idea to package ice cream in small containers and target mom-and-pop groceries along with restaurants. With a Styrofoam chest in the back of a battered station wagon, he went on the road selling, and ultimately got a break when a distributor in Boston picked up the line.

“I can’t afford to be without Haagen Dazs,” he told the pair. Cohen was dumbfounded, said Greenfield. “I can’t believe Pillsbury is afraid of us,” he said. Besides, wasn’t that illegal restraint of trade? Greenfield said the two figured if they were going down by suing Pillsbury, they’d take the case to the people, and launched what became a legendary advertising campaign.

“What’s The Doughboy Afraid Of?” screamed their ads. Both Ben and Jerry picketed Pillsbury’s Minneapolis headquarters carrying signs of the same theme, and they hired pilots to fly aerial banners across the sports stadium in Boston asking the question again.

They put together a “Doughboy Mailing Kit” for consumers to use to protest Pillsbury’s actions, and got the word out using a recorded telemarketing campaign. Requests for the kit poured in. It was a true David and Goliath story and the media loved it, including the Wall Street Journal and the New York Times. In the end—but long before social media—Pillsbury backed down and the brand went on to become legendary. 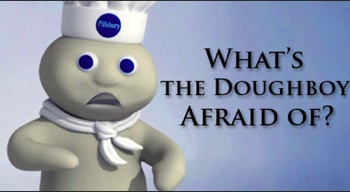 David and Goliath: With limited funds for a protracted legal battle, Ben and Jerry's got creative and took its fight against Pillsbury to the people.  The Doughboy campaign became a legend in marketing history and saved the brand.

But while the success was building, the two hippies who set out to make ice cream for fun realized they were no longer ice cream guys, they were businessmen, with employees, shareholders, and a big business. To them, big business was The Man: something that took advantage of employees and destroyed the environment, and they didn’t want to do that. But they were at a point where they needed money to grow, and didn’t want to go to venture capitalists, so they went public on a state and local level.

But eventually, as a public company, when personal products giant Unilever came calling with a hefty share offer, they had to go with what shareholders wanted, which was to make more money.

Selling out wasn’t an easy decision, admits Greenfield. It was a long, and often painful, process. But the two did ensure that their original values were kept—along with their jobs, which, as he joked, became symbolic instead of hands-on. But the sale to Unilever was contingent on the corporation keeping the same principles the founders set in place regarding integrity of the brand, including ethical sourcing, environmental responsibility and keeping an employee-centric workplace, as well as ensuring an employee profit-sharing plan for Ben & Jerry’s employees. It also was contingent on establishing the Ben & Jerry’s Foundation, which is funded with 7% of pre-tax profits every year.

“We’re overwhelmed with grant requests,” says Greenfield of the foundation. “There’s tremendous human need and never enough money to go around.” But he still maintains that the real power of a business is not how much money goes to charity, but in how it operates on a day-to-day basis in terms of its sourcing, financing, and so forth. As an example, Greenfield pointed to the brownies used in the Chocolate Fudge Brownie flavor, which come from a factory that hires only disadvantaged people.

But some of the Ben & Jerry’s ideals had to adjust to market realities. Among them was the salary structure that Cohen and Greenfield had established, preventing the kind of outsized CEO compensation packages that in years later would set off protests like Occupy Wall Street. The Ben & Jerry’s CEO was prevented from making any more than a 10-time rate over the lowest-paid employee. The original plan called for a five to one ratio, which was amended to a seven to one ratio, and eventually to 10 to one.

It wasn’t done to limit CEO salary, but rather to emphasize the importance of each employee to the final product. “We could go as high as we wanted on CEO compensation, as long as we brought the bottom up to remain within the ratio,” said Greenfield. But to get an outside CEO, the firm had to concede and pay market rate.

“It’s still not [an] outrageous [difference between CEO and employee wages] but it hurt to give in on such an important stake the company was founded on,” admitted Greenfield. But it just didn’t work in a larger environment, he conceded.

The years with Unilever have had ups and downs, he admitted to the Centurion audience. But the last three have been very good, and he likes the current Unilever CEO very much. And Ben & Jerry’s still does take controversial stances, such as its campaign to keep money out of politics.

“There’s a spiritual aspect to a business, just like an individual,” said Greenfield. “When you give, you receive.”