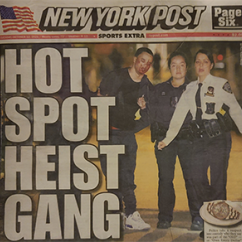 New York, NY--The New York Police Department (NYPD) has arrested a suspect who they said is part of a thug gang they are focused on bringing to  justice called "OED" (Own Every Dollar) that targets wealthy people wearing high-end jewelry and watches and has already pulled off some 12 heists and stolen more than $4 Million in luxury bling from patrons of top restaurants like Tao and Philippe Chow.

The story was reported on October 12 on the front page of the widely distributed New York Post (see photo above), as well as on pages four and five of the newspaper and in the Daily News and elsewhere.

The Post's reporting includes an interview with New York City Diamoind District merchant Maksud Agadjani, who was stripped of $150,000 worth of jewelry at gunpoint. He told the paperr he had been wearing three diamond and sapphire cdhains, a diamond pendant, three diamond bracelets and a diamond encrusted Rolex watch.

The robberies have been as follows:

August 29 and October 11 (where a suspect was apprehended) at Pergola on 28th St, where $100,000 in jewelry inckluding an Audemars Piguet watch was stolen.

October 7 in front of Buddah Bar-Restaurant on Thomas St., where the Agadjani robbery took place.

September 20 outside the Opus Lounge on 10th Ave., where two men were shot , one a 35 year old who was robbed of his jewelry after collapsing with fatal wounds to his body.

September 16 outside Philippe Chow ob 60th St., where robbers stole a Rolex from one man, chasing another man and shooting him in the leg.

September 9 outside the Silver Towers Condominiums on West 41st, where an off-duty cop was robbed of a Tag Heuer watch.

August 14 outside Tao Downtown on Ninth Ave., where thieves stole more than $4 Million in jewelry from two patrons, including a Richard Mille watch.