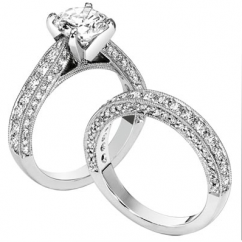 ORANGE, NJ—Lieberfarb, manufacturers of American-made engagement, wedding, and anniversary rings, chose for its brand the slogan, "For a Love That Lasts a Lifetime." But what some jewelers may not know is that its president and CEO, Mark Schonwetter, feels blessed to have a lifetime, period—with or without jewelry.

Schonwetter was born in the village of Brzostek, Poland, one of 500 Jews in a town of 1,500. By the end of World War II, however, only five Jews from the town had survived, three of whom were Schonwetter, his mother, and his sister.

In 1942, Polish friends warned the family that the Jews of the town were to be rounded up by the Gestapo and taken away the next day. Schonwetter’s father, Israel, was detained, but his mother, Sarah, grabbed him and his sister and fled their village in the dark of night. They later learned that Israel and the other Jews were executed in a nearby forest the following morning.

"Their survival was purely due to the goodness of a few brave Polish people," says Ann Schonwetter Arnold, who talks about her father’s early years on her blog, Ann Talking. "His story, like so many other Holocaust survival stories, is amazing, and at times, unbelievable. But what makes it unique is the recurrent theme that there are still good people in this world, even during the most dangerous and terrifying times of life."

Sarah and the two young children spent three years hiding and wandering the Polish countryside. Nearly starving, they lived in forests during warmer months or with sympathetic families when it was cold. Living quarters—when they could obtain any at all—included stables, attics, and underneath floorboards. But kindnesses were bestowed upon them along the way, such as in one town where they pretended to be Roman Catholics. Sarah confided to a priest during confession about the real truth of their existence. The priest blessed her and kept her secret.

When the war ended, the family came out of hiding. In 1957, they emigrated from Poland to Israel, but facing a lack of job opportunities there, Mark Schonwetter moved to the United States in 1961. Though he spoke no English, he obtained work at the Wright & Lato jewelry factory in New Jersey, where he swept floors under the supervision of a man who spoke Yiddish. He soon learned English and within five years rose through the ranks in five years to become the factory manager.

In 1971, Schonwetter purchased Lieberfarb, a manufacturer of plain wedding bands. "At the beginning, my father went on the road to sell some engraved bands," says Arnold. "He had only 12 rings. A jeweler in Philadelphia told him he seemed like a nice kid, and ordered one of each. Then he told him to get more of a collection!" He engineered a diversification and expansion of the company's offerings by adding a complete line of engraved wedding rings, engagement rings, men's diamond rings, and diamond anniversary rings.

Perhaps because of the opportunity that America afforded him, Schonwetter remains proud of the fact that Lieberfarb rings, two of which are pictured at top, still are made in the United States.

Schonwetter's wife, Luba, and their two daughters, Ann Schonwetter Arnold and Isabella Schonwetter Fiske, all have worked at the company, with Arnold currently serving as vice president and CFO. She and her sister started visiting the factory as children—they used to brush up gold dust, recalls Arnold.

"My father made us feel like we had the most important jobs in the world. He never made us feel like he needed a son. He saw what his own mother was capable of—women were never second-class citizens to him," says Arnold. It was his encouragement that got her involved with the Women's Jewelry Association, of which she eventually became national president.

In 2009, the Schonwetters returned to Brzostek for the re-dedication of the Jewish cemetery there, which had been destroyed in 1942. More than 30 original headstones from the cemetery were found, including that of Schonwetter's grandfather, Fischel Schonwetter.

At the jail where Schonwetter's father Israel had been imprisoned, a plaque now reads, "In memory of the Jewish community of Brzostek, its rabbis, teachers, shopkeepers, artisans, and all families, and in memory of the 500 Jewish men, women, and children of Brzostek murdered in 1942 in the Podzamcze forest, in the Belzec death camp, and other unknown places."

At the cemetery, both old and new headstones were re-dedicated, one to Israel Schonwetter. More than 65 years after his death, the Jewish prayer for the dead, the Kaddish, was finally recited for him and his fellow townspeople. For Schonwetter, who spent his youth wandering the countryside, it was a homecoming at last.

The staff of Lieberfarb will be celebrating Schonwetter's milestone anniversary during the Luxury by JCK Show, May 31-June 6. Industry friends and colleagues are invited to stop by the company’s booth, LUX1033 to see its collections, and celebrate a lifetime.

To read more of Mark's story, visit www.annarnold.blogspot.com. Preview the Lieberfarb collection at www.lieberfarb.com and follow the company on Facebook.