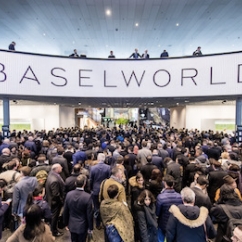 Basel, Switzerland—Perhaps the biggest news to come out of the 2018 Baselworld Fair was about what wasn’t there, rather than what was. The fair, one of the three biggest events of the global jewelry and watch calendar, is about half the size it used to be, and news coverage from the world over had plenty to say about it.

Wei Koh of the watch site Revolution was the most critical, while Israeli-based trade journalist Ya’akov Almor has been saying likewise for years. As the cost of booth space at the fair skyrocketed, independent designers and smaller jewelry companies were priced out, then even bigger companies like the Timex group and U.S. based Shinola had enough and dropped out as well. Meanwhile, more and more important global brands (like Kering Group and Hermès) have decamped to SIHH in Geneva.

At the same time, visitor foot traffic to Baselworld declined the past few years along with the exhibitor count, owing to the exorbitant cost of staying anywhere in reasonable proximity to the fair. Local hotel rooms must be booked for the duration of the fair, regardless of how long the guest actually needs to stay—and restaurants in the city are known for jacking up their menu prices for the duration of the fair. All that adds up to a lot of people saying “thanks, but no thanks,” as tallies from recent years attests, but a press release from the fair’s organizers claimed an 8% jump in professional visitors on the first two days of the 2018 event. 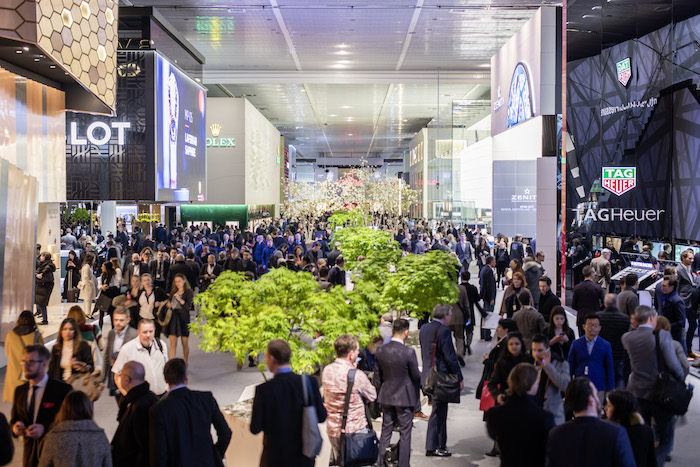 Inside Baselworld's famous Hall 1, the watch hall. Figures released by the fair claimed an 8% jump in visitors on the first two days of the 2018 event,  but many international reporters expressed skepticism over the number, citing clever layouts such as the row of trees above to compress crowds into a tighter space.

This year, the number of exhibitors was cut from 1,300 to about 700, and the duration of the fair was trimmed back by two days. Still, as Roberta Naas of ATimelyPerspective.com points out, even in its reduced state, the fair itself is still an important event on the global jewelry and watch calendar. It still is home to many major brands (above), and even if companies choose not to exhibit within the formal walls of the fair, there are lots of satellite showrooms around the city.

The other big news of the 2018 Baselworld fair was the acceptance of digital commerce and/or technology in an industry long known for being laggards. Donnie Pacheco of Seattle, WA-based Clean Channel Consulting joked to Luxury Daily that the luxury watch industry runs about 15 years behind the times in anything digital.

But as consumers—especially Millennials—flock to smartwatches at the expense of heritage brands, those brands are stepping up their game. Some, such as Frederique Constant and Hublot, have created smartwatches that blend today’s technology with luxury heritage, while other brands have at least acknowledged they need to sell online, a reversal of previous “never!” stances. Read more here and watch a Hodinkee video interview with Jean-Claude Biver, CEO of TAG Heuer, on the future of the luxury smartwatch, here.

Separately, the latest WorldWatchReport Benchmark study published this week by Luxury Society reveals that China has overtaken the United States as the number-one source of user visits to luxury watch websites. Chinese visitors accounted for about 21% of global traffic to luxury watch sites, while Americans account for about 13% of traffic to those sites.

Growth in web traffic to luxury watch sites increased 9% worldwide, but is rocketing in Asia. In China, it’s up a whopping 35%; it’s up 28% in Japan and 25% in Hong Kong.

By contrast, growth in visitors to luxury watch sites edged up only 1% in the United States last year. But the rocketing growth in China isn’t necessarily translating into a major surge in sales—poor quality traffic is a major challenge. 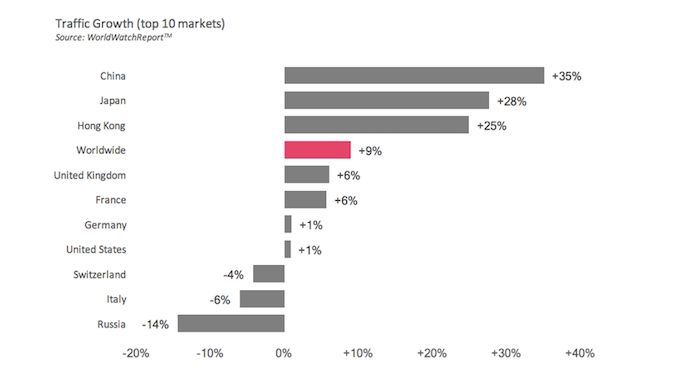 Next article:
JSA: Total Crime, Homicides, and Residential Crime Up in 2017, But Still Much Lower Than Peak