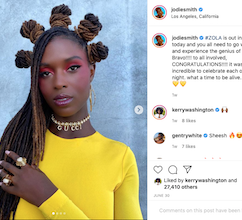 Cannes, French Riviera—If you’re ever invited to the Cannes Film Festival, do yourself a favor and don’t bring expensive jewelry. In fact, if ever there were a time to hunt out the best faux lookalikes, this is it.

And if you’re ever asked to dress a celebrity who’s going to the Cannes Film Festival, you might want to think twice. Or double your insurance coverage.

Expensive jewelry has a way of disappearing in Cannes. As this article in Meawww.com explains, whether it’s savvy jewel thieves who want a dose of glamor themselves or just figure that old Willie Sutton was right and you go where the money is, jewel heists are as much of a thing at Cannes as the films on debut.

The latest theft happened to British actress Jodie Turner-Smith, who was spotted wearing a hefty pile of gold and diamond Gucci jewelry to the premiere of her new film, “After Yang” last Thursday. On Friday morning—presumably after Gucci reclaimed the company’s goods—burglars slipped into Turner-Smith’s room while she was out having breakfast with her young daughter, and cleaned out whatever jewelry was left, including her mother’s wedding ring.

Reports say there was no sign of forced entry into the room (suggesting an inside job with a master key?).

There’s no shortage of high drama and high-value jewelry theft at this most famous film event. The Carlton hotel has been at the center of infamy more than once: in 1994, gunmen burst into its onsite jewelry store and made off with jewels valued at $77 million; in 2013, an armed man stole jewels worth about $53 million and a member of the Pink Panther gang was suspected of taking off with $130 million worth of gems.

There’s the $1.4 million worth of Chopard jewels that disappeared from the safe of a Chopard employee staying in the Suite Novotel Cannes Centre hotel room. The suspect accessed the safe through an adjoining room with a connecting door. 17.5 million euros’ worth of Cartier jewelry vanished from its shop in Cannes. A necklace by Swiss jeweler De Grisogono worth $2.5 million vanished after a celebrity party at a five-star hotel in the nearby town of Cap d'Antibes.

And, finally, there’s just the plain old stupid, such as the 2019 incident where a featherbrained courier got off an EasyJet flight and left behind the very thing she was hired to go to Cannes for in the first place: to deliver a suitcase containing $3.8 million worth of diamond jewelry to singing star Rita Ora, who was to wear the pieces that evening. The courier disembarked in Nice, France and left the bag on board the plane, which immediately turned around and headed back to London’s Luton Airport. Luckily the bag was immediately recovered by police in London and the jewels were returned to their rightful owner.