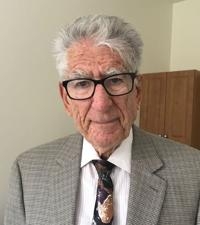 Cherry Hill, NJ—Former jeweler Irvin R. Liachowitz, who ran a jewelry store in Shamokin, PA for many years, died July 9 at age 96 after a brief illness.

Liachowitz who was born and raised in Shamokin, an anthracite coal-mining town in the northeastern part of the state. Following his graduation from Shamokin High School, Liachowitz served with honor in the U.S. Army Corp of Engineers during WWII, returning home to Shamokin in 1945 and joining Liachowitz Jewelry Store, the family jewelry business founded by his uncle in 1888.

A tribute in The News-Item says Liachowitz was renowned for his virtuoso at the piano, a skill he used to advantage in the war by entertaining at the Officers’ Club while stationed in France. Back home in Shamokin, he embraced the community, holding membership and officer positions in such organizations as B’nai Israel Synagogue, the Elks Club, the Optimist Club, the Shamokin-Coal Township Public Library, the Shamokin Area High School Alumni Association, and founder and president of Community Concerts Association, a nod to his love of music, for which he performed in many concerts in the northeastern/central Pennsylvania region. He also was an avid reader and lover of the Sunday New York Times crossword puzzle.

In 1950, Liachowitz married Lillian Rosenberg of nearby Pottsville, and the couple raised a daughter, Susan, and son, Joel. He loved running the family jewelry store, a staple of the community. Liachowitz worked in the store six days a week until the end of 2004 when, at age 80, when he retired and closed the store after 116 years in business.

In his later years, Liachowitz lived in an assisted-living facility in Cherry Hill, NJ, near his daughter Susan.