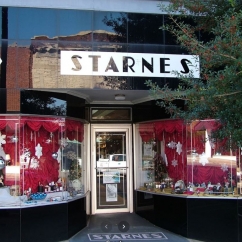 Albemarle, NC--A 120-year-long tradition needed to be taken forward, so when Starnes Jewelers announced it was closing after many years, others decided to give it a new lease of life.

According to a news report, the store was rebranded as Starnes Bramlett by Chris Bramlett, a certified gemologist appraiser who has worked at the store since 1981. It would be new innings at work for Bramlett, who decided he wasn't ready to retire.

The change of ownership had to be smooth — Bramlett's brother-in-law, Gene Starnes, had owned the store since 1976 and decided it was the right time for a change so he could focus more on his health.

Now rebranded, the store's ready to serve familiar customers. The changes have been defined, too — there will be less emphasis on gift items, and a longtime employee will be promoted to general manager.

“You could not have a better staff to operate a jewelry store than what we have,” Bramlett, 83, says in the news report. “They knew the people, and they know the goods.”

Bramlett wants to do everything in his power to continue serving customers. “As long as I’m healthy and can actually come to work in the mornings, I plan to do that,” he said, as per the report.

Keep reading on the transition in the original news report.

Previous article:
‘It Is Just Time’: Martinek’s Jewelers to Close After 144 Years