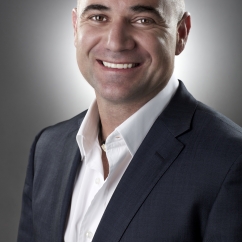 Las Vegas, NV--Andre Agassi, author, philanthropist, education advocate, and former number one ranked tennis player and multi-grand slam champion, will be the opening keynote speaker for the American Gem Society’s Conclave in Louisville, KY, May 1–3, 2023. The event will be held at the Omni Louisville Hotel

"Andre Agassi exudes qualities from his tennis career that aligns with our businesses and the American Gem Society,” said Denise Richards, chair of the Conclave Subcommittee. “Being the best, hard work, dedication, and training are all themes we can identify with, and his philanthropic endeavors are something to be admired.”

After turning pro at 16, the tennis prodigy rose to international fame, earning 60 men’s singles titles, including eight Grand Slam singles championships, over a 20-year career. At 24, he created the Andre Agassi Foundation for Education. For more than 20 years, the Foundation honed its mission to focus on transforming public education. Since the inception of the Andre Agassi Foundation for Education, $185 million has been raised to benefit its mission. His autobiography, Open, topped the New York Times bestseller list and continues to hit record sales internationally.

In addition to Agassi, two other notable keynotes will be featured at Conclave. Liz Forkin Bohannon will present on May 2. Forkin was named a top speaker by Forbes. She is the founder of Sseko Designs and the author of Beginner’s Pluck: Build Your Life of Purpose and Impact Now. Sseko Designs is an ethical fashion brand that works to educate and empower women. By providing employment and educational opportunities, Sseko enables women to continue their education and become leaders in their country.

The keynote for May 3 is the comedy act, The Passing Zone, featuring Owen Morse and Jon Wee. This entertaining duo are inductees in the National Speaker’s Association’s Speaker Hall of Fame and have appeared with headliners like Jay Leno, George Carlin, Penn & Teller, and appeared on CNN’s Road Warriors, Hell’s Kitchen, An Evening at the Improv, and NBC’s Today. They’ve even performed at the White House. Their most recent show, The Passing Zone Saves the World! is currently touring.

The two have published articles in Teamwork, Work-Life Balance, Taking Risks, and countless industry periodicals, including Smart Meetings, Networking Times, Financial Executives, Successful Meetings, and many more. They were chosen as a “Best Bet” for entertainment by the Wall Street Journal, and Special Events Magazine named them one of the Hottest 26 Speakers.

To register for the event, visit AGS.org/Conclave. The American Gem Society urges all members to book their hotel rooms early, as the Kentucky Derby immediately follows Conclave.