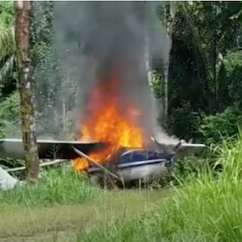 Boa Vista, Brazil (AP)—Authorities are working to thwart the efforts of illegal gold miners in Brazil's Roraima state, home to the country’s largest Indigenous reserve, Yanomami, among others. Gold mining is against the law in the entire Roraima state, but that hasn’t stopped crooks from trying. Image, AP: Authorities are trying to crack down on illegal gold mining by targeting the aircraft and fuel used by the miners.

According to this Associated Press article, environmental and Indigenous rights groups estimate there are some 20,000 miners present on the Yanomami reserve, about the size of Portugal. Government officials, meanwhile, say there are only about 3,500 illegal miners.

Authorities are trying a new tactic to crack down on the illegal mining: going after the aircraft and fuel used to transport workers and machinery in and gold out.

“Drawn by high gold prices, reduced state and federal oversight, and outdated mining legislation, plus pro-mining rhetoric and proposed legislation from far-right President Jair Bolsonaro that would make it legal to mine on reserves, thousands of miners have flocked to the Yanomami reserve in search of the precious metal, exacerbating a longstanding problem that has only grown worse in recent years,” says the AP article.

Prospecting on the Yanomami Indigenous land mostly takes two forms, says the article: dredging of waterways with barges and surface mining. In the latter, prospectors dig pits and blast away sediment with powerful hoses, from which they separate the water then use mercury to extract the gold.

Indigenous leaders say this leads to environmental destruction, but the prospectors don’t care. Sometimes the locals take matters into their own hands, but that typically leads to retaliation, such as happened to Maria Leusa Munduruku, president of the Munduruku Womens’ Association, whose house was burned to the ground by the miners after authorities raided a huge illegal mining camp on the Munduruku Indigenous territory, destroying multiple backhoes.

“People who are sick wanting to exploit us, take the gold. We can’t eat gold. Gold isn’t worth anything to us. What’s valuable to us is the water, the river and the forest,” she said in the AP article.

Attempts to legalize mining in the region have so far been struck down. Legalized mining would exclude Indigenous lands, but locals fear that it would encourage even more illegal mining and the gold would be mixed in with legally-obtained gold.

The situation raises concern for the jewelry industry, as consumers are increasingly focused on sustainability. Diamonds have typically been in the spotlight, but gold has the potential to become a flashpoint as well.

Jewelers should educate themselves about everything the industry does to keep illicit gold out of the pipeline (see the World Gold Council website here), consider joining the Responsible Jewellery Council, and know their own suppliers. Don’t be shy about insisting your suppliers know their sources, too, all the way up the supply chain.

Read the full article here and watch an AP video below.

Next article:
ICA Cancels GILC and Tucson Reception, But AGTA GemFair Is On